Cordello Collins, wounded in thigh and hand, succumbed to wounds weeks after battle

Times Observer photo by Josh Cotton The grave of Kinzua-native Cordello Collins, who was wounded at Gettysburg and died in the following weeks, located at the Soldier’s National Cemetery at Gettysburg.

Unsurprisingly, it took time to refit, refill the ranks and recovers

Times Observer photo by Josh Cotton The grave of Kinzua-native Cordello Collins, who was wounded at Gettysburg and died in the following weeks, located at the Soldier’s National Cemetery at Gettysburg.

after such a major battle – the next major battle wasn’t until December and it appears that Collins’ regiment was not significantly engaged.

However, Collins next letter that has been preserved writes about his participation in the “Mud March,” a foolish plan to swing around Lee’s flank in the weeks after Fredericksburg.

As the name suggests, the army bogged down it the mud and after just a couple days the movement was called odd.

Collins here, as in many letters, expresses concern about getting money to his family. 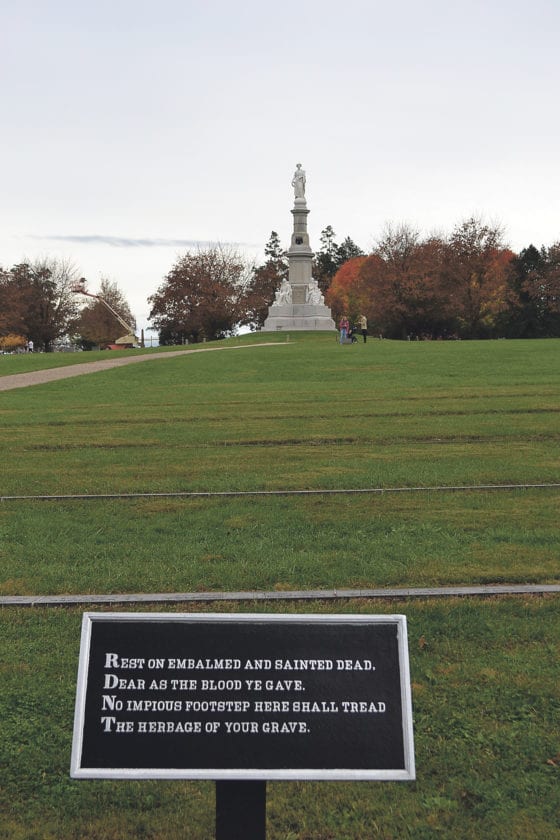 My letter hant gone yet that I wrote yesterday and we have got order that we are goin to Washington to do pervose (provost) duty. So you see that

is the reason that I did scratch out the direckions. Direct the Box as I said first, Cordello Collins Co. D first Rifles Bucktails Regt. P.R.V.C. Care of Lieut. Hall Washington D.C.

We have after so long a time we have got 4 munths pay. 24 Dollars of it goes home as usual by the U.S. express. Please go rite down and see about getting it and go to Oris Hall and get my revolver.

If Robbert Campbell 29 can wait till a nother payment is made to me please keep that monny to pay for things that I want acasionaly in the time of nead and to by stamps for me and uther things as I send for them. And I want some to use when I get my discharge. Use of the monney all you want to use to make out the express box or to by stamps to send your letters.

The snow is the deepest now that I have seen it since I left Penna. It is 8 or 10 inches deep. The sun is shining now very bright. Mr. Oris Hall did not go home the other day so he is goin today I belive.

We have pretty happy little meetings here in my tent. I am pointed a clase leader of our little meeting. We call it the name of Christon Soldier. The [re] is 5 in the Class of us: Gorge W. Chase, Gorge W. Gates, Fletcher Hamlin, Frederick Knup (Knopf). Thoses is the name of the ones that belong to the class and myself. The too (two) first ones is the ones that tents with me. That is all of this.

Well now a little more of Burnsides movement. If it had not been for the rain perhaps we would whiped the secesh very bad but through the luck we whiped our selfs. No more of this. Write soon.

From your affectionate Sun

After the “Mud March,” the regiment was ordered to Washington D.C. on February 6 and remained there until it joined the Army of the Potomac again in the drive north that became known as the Gettysburg Campaign.

I received a letter from you and Amy to day. It gave me the greatest of pleasure. I was very glad to hear from you but I was sorrow to hear that you pap was so aling (ailing) in your lungs.

I am well and harty. I belive I could eat ten or twelve morinoess taters if I could get them. I way one hundred and seventy five pounds. 175 lbs and on picket every 2nd or 3rd day and night rain or shine. That is what makes us grow so.

I got 4 munths pay to day. You can see by Johns and Nancys letters. The camp guard fires off ther guns every morning at a mark and the one that makes the best shot gets a preamem of 50 cents. I have been on guard twice since that has been the order and I got the half dollar both times. We shot 250 yards then but we shoot 300 yards now. Both of my shots would hit a deers head. I shot one day once at a mark on a tree 200 steps or yards and hit over the senter about a half of an inch. I belive I can hit a deers head 200 yards every time if I could guess the rite distent. Well I will close this. Rite soon.

To John and Dolly Collins

Send me some Stamps

I now take the present opportunity to answer your kind letters. I got a letter to day from pap and Amy. Pap said you both was very anctious to get a letter from me in reply to yours. I thought that I had answerd your letter before but if I hant you must excuse me this time.I hant mutch news to tell you this time. Only that the trees is in flow[er] here. The grass is growing fast. Itis raining here now. I got 4 mounths pay to day. 24 dollars goes home as usual by the U.S.

John I expect your steers is old whoppers. Oh I wish I was there now but I ant so there is no use of wishing. But I hope it will be so that I may come home this somer (summer) eather for good or on a visett. Nancy you can write pretty well. You can all most beat Amy a writing. Johny you hant lernt so fast lately as you did. Can Ebby write eny yet?

I sent the roll of our Company as it is now home. The names that has the star to is the ones that has been wounded. Write soon.

Reinsberg noted that the letter he published in his article were from the pension file and specifically included to show that Collins was providing substantial financial support to his family.

It’s likely that there are other Collins wrote to his family after April.

But the letters would have stopped in late July.

His regiment was involved in charging a position near the Wheatfield on the second day of fighting at Gettysburg. They held that advance position through the night and throughout the day on July 3.

In the afternoon – the timing is not yet clear – the regiment advanced through a woodlot and became engaged with troops from Anderson’s Division of Georgians.

Collins was wounded in the right thigh and left hand, according to a Findagrave profile, and transferred to a field hospital at Two Taverns, about five miles south east of where he was wounded. The profile states that he died on July 30 (Reinsberg said he died on August 8) and was originally buried at Jesse Worley’s farm before he was reinterred in the Soldier’s National Cemetery – the site of Lincoln’s Gettysburg Address – where he rests today.

Reinsberg notes Cordello’s father died about a year-and-a-half later of tuberculosis, leaving Cordello’s mother on her own with five children still at home.

“Some time after the Civil War,” he wrote, “Mrs. Collins made application to the U.S. Commissioner of Pensions. As proof that her deceased son Cordello had contributed substantially to the family support while in the army, she submitted these letters which discussed money matters.”

That’s how the letters wound up in his pension file.

The Federal government at this period was not particularly adept at record keeping for the official muster roll doesn’t indicate that Collins – included with a misspelled name “Cordillo” – died from his wounds, rather saying that he was just absent when the regiment was mustered out of the service. 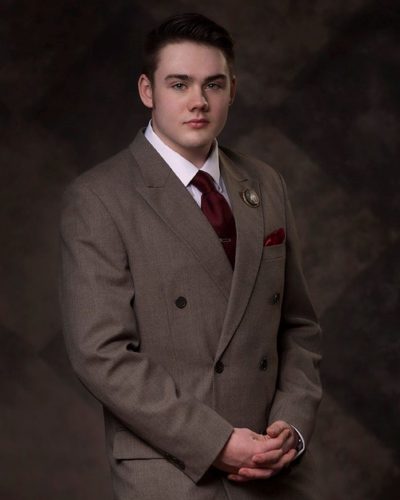 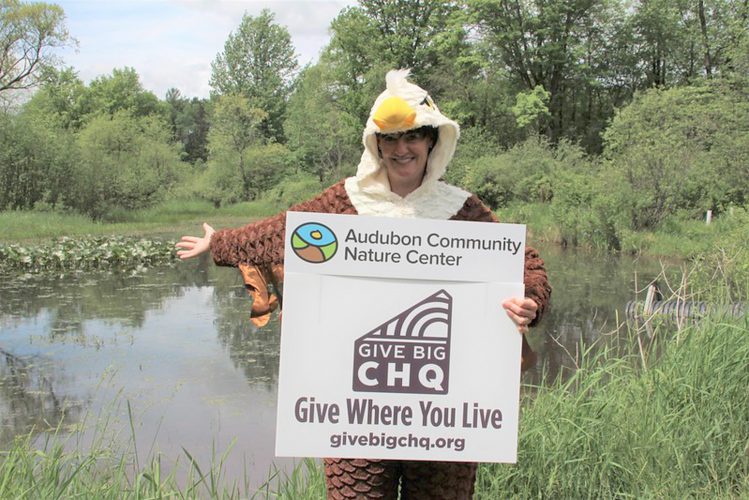 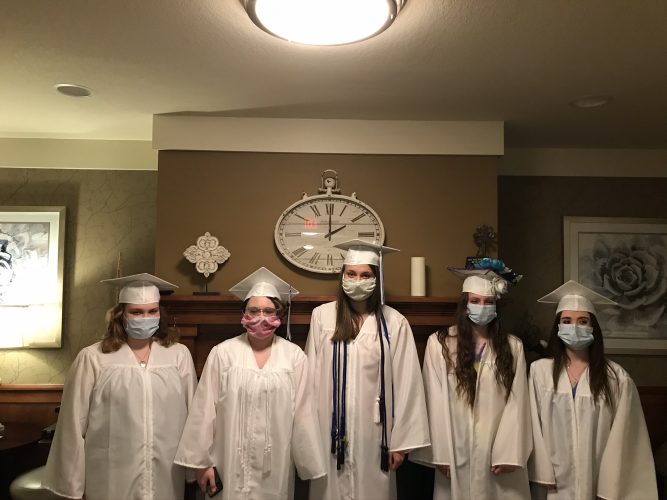