Village Missions/Country Partners held its “Remembering our Veterans” luncheon on Nov. 13 at the Allegheny Community Center.

Kay Gray and Lee Jones greeted guests at the door and Debi Sprague, chair, welcomed guests and reminded them that there are no dues or membership.

Karen Zurchan opened the meeting in prayer and blessings for the food to be eaten. She also mentioned that this month and in December pairs of socks are being collected for our veterans to be sent overseas for Christmas.

Emil Bundy and Virgil Carlson were winners of the hostess gifts.

Bundy offered a spiritual personal story of a contracting job that he undertook that had its challenges. He was uncertain of its outcome, and with his faith in God, the project came out better than he expected. Bundy owed it to His God intervening.

Nancy Schuyler gave a report from Village Missions of a church in rural Washington state that found its small congregation of 21 almost failing. Village Missions sent a trained pastor to minister to increase the membership from the low 21 to 137 people who now attend regularly. She explained that this ministry is the purpose of our organization; we give these failing churches a monthly donation to help train pastors to reach out and spread the word of Jesus, distribute Bibles to children, teach them about Jesus, and help save small town churches in danger of folding.

Yvonne Lee introduced the featured guest, Sandra Droney of Sheffield, showing her homemade crafts including adult and children’s clothing, doll outfits, scarves and hats, kitchen linens, blankets, and Christmas items. Droney told of how she spends hours daily crocheting as her full-time job. She learned the craft at the age of 13.

Ford sang his second selection, “Bring Them Home,” in honor of our veterans.

Lastly, the spiritual speaker was Joyce Hondru of Pittsburgh, speaking on “Lost and Found.” Hondru began by telling of times she got lost, taking the wrong highway making her late for play practice, losing two cameras including one belonging to her sister, taking pictures on excursions, and even losing a young nephew at the zoo. She became truly lost as a teen in adolescence, and only when attending a Christian Crusade with a friend, did she realize that her sins separated her from God. She went back to church, became a youth leader at her church, later married, and found a job counseling and praying for lost, runaway youth, including a special niece. Through this, her marriage deteriorated, she separated, and moved from her country home to an apartment in the city. She divorced in 1988, got a new job, her grandfather passed, and the stress built up culminating after notice of an IRS audit. She knew she had to embrace changes to heal, and she joined another church, became involved in youth group, and led a Bible study. She remarried a man in 1993 with three boys, moved up in her new job to vice president, and all the while she became closer to God. She quoted JFK, who said, “Those who live in the past and focus on the future, lose sight of the present.”

When we have felt lost, separated, and alone, it all boils down to our past.

Hondru summed up, “Yes, lots of changes come into our lives, health, jobs, relationship, and status. If I wallow in the past, I will not change. If I look too far ahead, I will lost sight of the glorious future of eternal life with Jesus.”

Ford closed with his last song for our veterans, “Letters from Home,” and offered benediction.

The December 13 meeting is at noon at the ACC at noon and will host spiritual speaker Rev. Dorothy Hilliard of Faith Fellowship Church of God of Warren, as well as featured guest Kathy Masterson of Scandia Mountain Florals on “Holiday Decorating.” Music will be by Richard Geer of Warren. 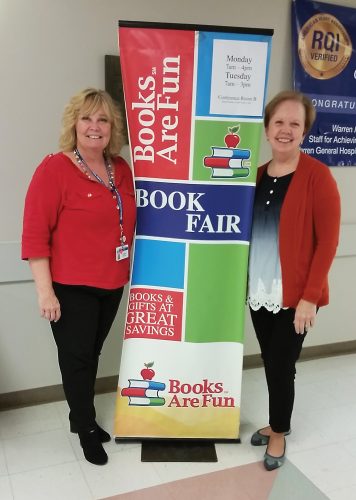