‘Easy to forget it was a drill’ 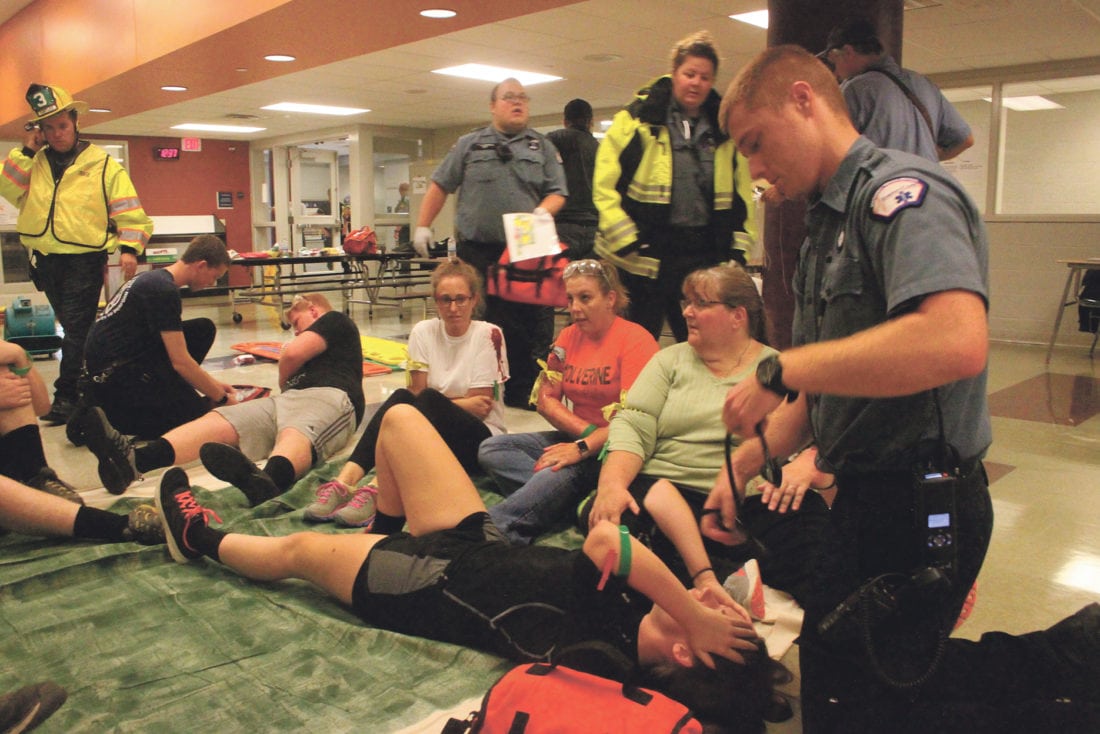 Times Observer photo by Brian Ferry During an active shooter drill Tuesday at Beaty-Warren Middle School, EMS personnel treat victims who are not seriously hurt in the green triage area.

It was all over in a matter of minutes.

But those were long minutes for the victims — volunteers from the Warren County School District’s ALICE trainers and the City of Warren Police Explorer Post — and the district staff and others watching from safe locations during active shooter drills Tuesday at Beaty-Warren Middle School.

Each scenario lasted about an hour.

The high-profile part of that — law enforcement officers with guns tracking down and containing or killing a suspect — took a few minutes.

No victims were receiving treatment from responding EMS providers during that time. 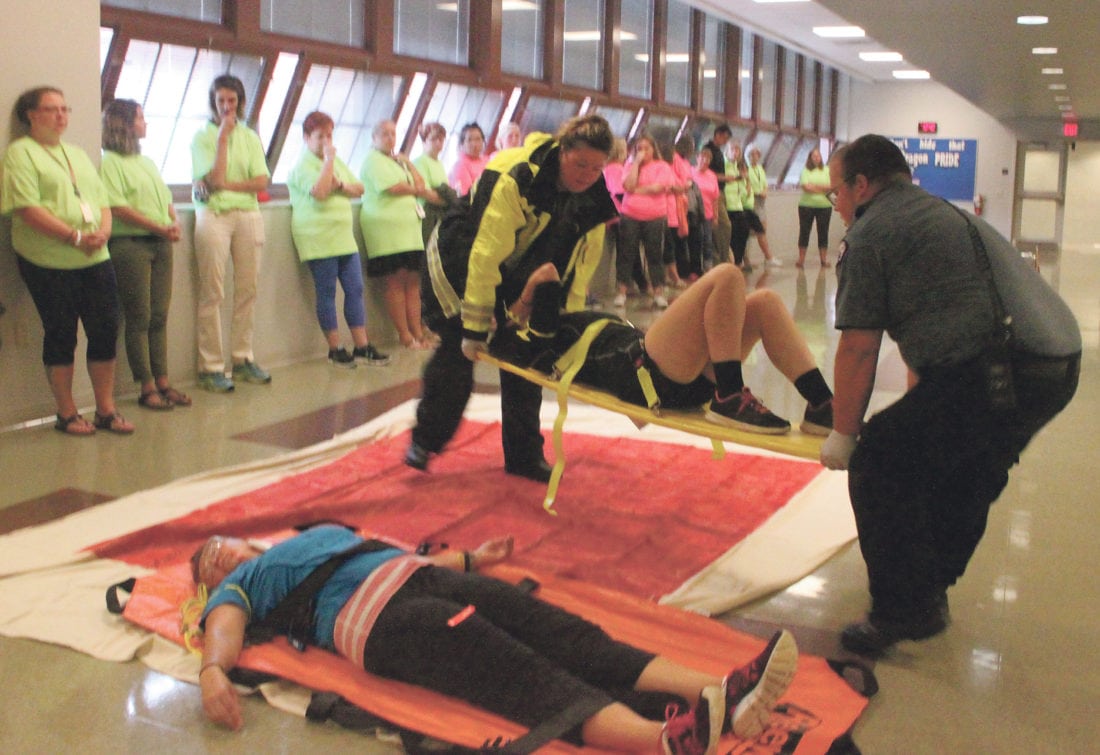 Then, the work of making sure there were no other threats began. Officers went door-to-door clearing rooms. Still, no treatment.

Eventually, enough of the building was clear and EMS entered with law enforcement escort. Still, no treatment.

Both before and after the shooter was found, victims — some lying on the floor, others running through the halls — begged for help, screamed their frustration at not being cared for, and generally increased the stress levels of the participants.

The victims were instructed on how to act. Some were quiet. Some were dead. Some were very loud. Not everyone who was loud was seriously injured. Some of the victims were more concerned about their friend upstairs or still in the building or wherever more than themselves.

It was easy to forget it was a drill. “When your adrenaline starts going, it’s ‘This is real,'” Rebecca Thayer said. The first time she saw the ‘shooter’ all dressed in black and carrying a gun “it felt so real.”

Garret Abbott said it was stressful, especially when the fire alarm came on, and seemed like a long wait.

Jacob Hayes was triaged with a green tag — not in immediate need of care. He knew it was a drill. He knew he was going to make it and wasn’t worried about how long it took for someone to come treat him. “Someone in that situation, it would seem like a longer time than it is,” he said.

They, like real victims would, had to wait while law enforcement officers walked past them, in some cases several times without giving them more attention than to avoid stepping on them.

Later, when areas were declared safe enough for EMS, those same victims yelled at those responders. The job of the first providers through the building was to find victims and identify the seriousness of their injuries.

The protocol is very specific. The first EMS providers into the scene make quick evaluations and move on — not offering treatment.

Victims are then removed to a safe triage area where they receive further evaluation, preliminary treatment, and are loaded and transported to the appropriate medical facilities in order of need as determined by the providers.

It was a learning experience.

“We’re trained to know what to do,” Superintendent Amy Stewart said. What they were not prepared for “was the amount of time for the victims.”

That time when no one is providing treatment because the situation is unsafe, can be filled by, at least in part, by district employees. “That’s why we’re getting the Stop the Bleed kits,” Stewart said.

The district has kits that contain tourniquets, gauze, bandages, and other emergency medical equipment, in each building. Officials are hoping to put kits in every classroom and to increase the number of packs out in the community — cars, homes, hunting camps…

People who would like to buy an emergency kit may do so by contacting any teacher or the district office at 723-6900. For each kit that is sold, the district will receive one free kit.

One of the things a drill cannot replicate is the impact of concerned, well-meaning adults.

“One of the main points of chaos that can be cause at the scene is parents coming to get their kids,” Stewart said.

Having hundreds of parents drive to a district school in an emergency will cause access problems — in and out — for responders.

Adults who charge into an active scene could easily be identified as threats by law enforcement already inside.

And, if a responder has to handle a situation caused by an adult, that is one less responder helping solve the real problem.

Students who are evacuated from a school building will not be released there. They will be transported by the district to another location and district will notify parents — through call blast, Facebook, and news media — where to pick up their children, Stewart said. “The reunification point will be set up away from the danger.”