Ball in the House at Struthers 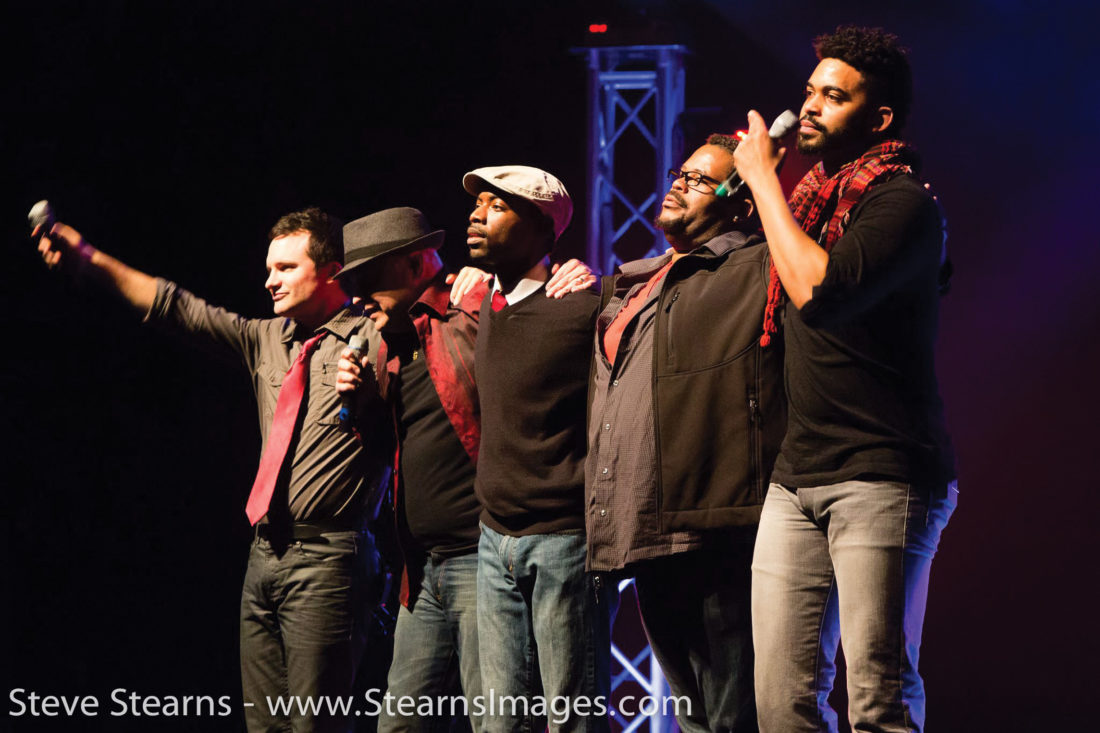 Photo submitted to Times Observer Ball in the House.

On Saturday, Dec. 3, the Struthers Library Theatre will be filled with the sounds of the season, Rhythm and Blues, Soul, and Pop A Cappella when the Warren Concert Association presents Ball in the House.

“p1″>A well-traveled and highly-praised A Cappella quintet, the five male voices of Ball in the House make “music that’ll move ya!”  This Boston-based gang of five has shared the stage with artists including the Beach Boys, Jessica Simpson, Blondie, The Temptations, Gladys Knight, and Smokey Robinson.  In addition to stage performance, they’ve recorded their own CDs and have professional cred as the voice of Cool Whip for radio and television ads.

“p1″>Songwriter’s Monthly has said of BITH, “They offer jaw-dropping A Cappella brilliance, Top 10 song crafting skills, and genius arrangements.  Ball in the House is one of the best bands around, bar none.”

BITH founder, Jon J Ryan, became seriously involved in music when, in fifth grade, he joined the Boston Boys Choir.   He sang every day, learned sight reading and to play the recorder, piano and hand bells. Discovering the magic of keyboards and drum machines, he enrolled at Skidmore College where he could not only major in music in the classroom, but also get musical experience outside.  He joined the school’s A Cappella group, Bandsnatchers, and at the same time, played in a band, sang in a chorus, accompanied on piano, and did instrumental and vocal arranging.  Always loving rhythm, he fell hard for the beatbox.  Since starting BITH, he has worked on beatbox to the point of performing for an entire show.  With a full-time gig with BITH, dream achieved!

“p1″>Jon is joined by Dave Guisti, a childhood friend with whom he shares the experience of Boston Boys Choir.  Dave is a longtime BITH musician, having  passionate for the BITH outreach with students, loving the opportunity to share and hopefully inspire them to perform and see that “music is cool.“Apple-converted-space”>  You don’t have to choose between sports and the arts.  Get involved with both!”  Dave’s mantra…Music is a beautiful universal language.

Monty Hill has been singing all his life.  As a child, the sounds he produced didn’t please his seven siblings.  But, now, after years of school band and chorus and a music degree from Morgan State, his experience with vocal music and musical theatre has him making sounds that everyone wants to hear.  He lends his baritone to the full and rich sounds of his mates of Ball in the House.

Being raised by musical parents, it is not a surprise that Wallace Thomas has created a career for himself in music.  Introduced to A Cappella music in college, he joined an all-male group that performed around Florida and competed in regional events.  His enjoyment with cantoring in churches and crooning in local restaurants and club had Wallace looking for a prominent, earn-a-living singing opportunity.  Ball in the House has made that happen for this Floridian tenor.

Ben Detty is the newest member, having joined in 2015.  A Rochester, NY native, he’s been a vocalist since the age of four.  He’s dabbled in musical instruments, the trombone and euphonium mostly, and had a brief career as a lab technician, thanks to his UB degree in chemistry.  While in college, his involvement in performance and A Cappella music and singing with friends led him to a BITH opening for a bass.  Now his chemistry is on stage with the voices of Ball in the House.

Tickets are available now at VirgAnn’s and the business office at the Library Theatre.  On Saturday evening, the theatre box office will open at 6 p.m. for ticket purchases.  All tickets are festival/open seating. The concert begins at 7:30 p.m.