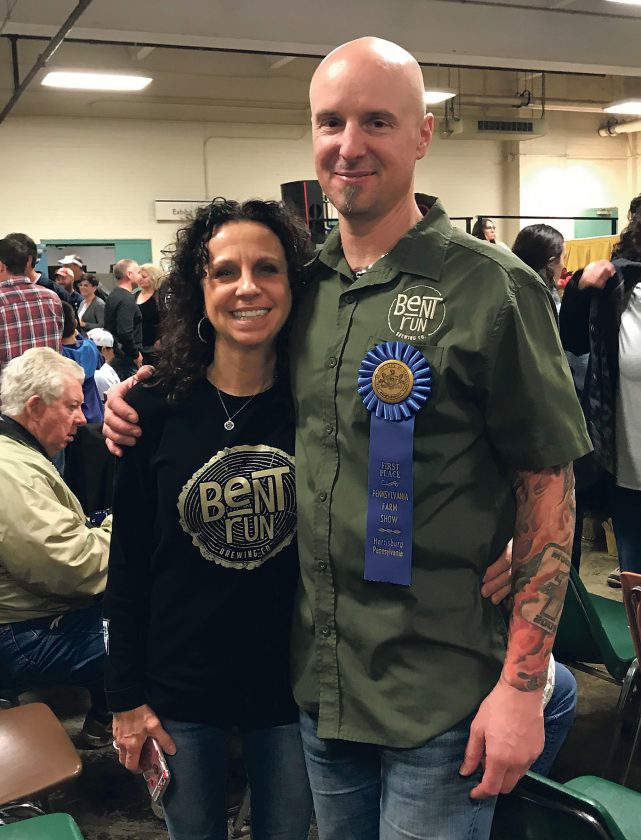 For the second year in a row, Bent Run Brewing caught the eye of the judges at the Pennsylvania Farm Show.

Technically, Pearl O’ My Eye has won the category every year it has been held: 2019 was the first for the craft beer competition at the Farm Show.

“We’re very honored to receive an award for something we put so much effort into,” Phil Caudill, who, along with his wife, Denise, owns and operates Bent Run, said. “With more breweries across Pennsylvania than ever before and more great breweries entering this competition this year, it means even more to us.”

The Speciality IPA category catches IPAs that don’t quite fit into traditional categories.

“This is a perfect category for our Pearl O’ My Eye because it isn’t a traditional beer,” Caudill said. “Although it is considered to be an IPA, due to the amount of hops used in our process of making it, it appeals to a very wide variety of beer drinkers. In fact, it appeals to many of those who haven’t cared for ‘beer’ and others that say they don’t like IPAs.”

“I think it is best described as being ‘mouth friendly,'” Caudill said. “It is soft and not overly bitter, with tons of tropical and citrus flavors and aroma with a slightly sweet finish.”

The recognition from the Farm Show has helped the business move forward. “We’ve had great success over the last year,” he said. “I can’t attribute all that to just one thing like winning these awards. Receiving these awards and the publicity that comes with it certainly helps to get our name out there to potential customers that may never have heard of us.”

Over the past year, Bent Run has been going through a move from Lander to the Warren riverfront at 20 Clark Street.

“With opening the new, larger location in downtown Warren, we’ll be able to better serve our loyal patrons as well as all the new ones,” Caudill said.

The move is expected to help meet the demand for Pearl O’ My Eye, too.

“It has been a struggle to keep up with the demand we’ve had for this beer,” he said. “We hope to fix this problem at the new location with a 17-times-larger brewing system.”

Whether or not there is enough Pearl O’ My Eye, “we’re always trying to have something for everyone with up to 20 offerings on tap,” he said.