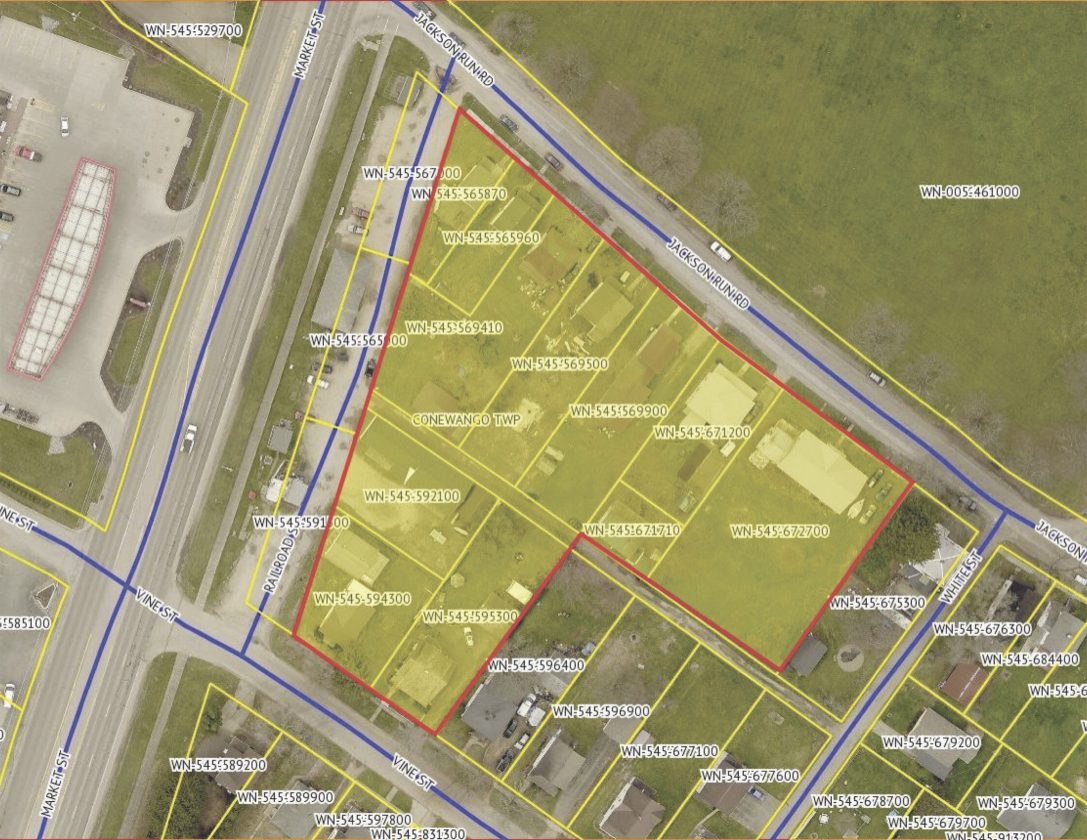 Photo submitted to Times Observer The properties on the corner of Jackson Run Rd. and Rt. 62 in Conewango Township were changed from a residential zoning designation to a business designation. The proposed commercial development may end up being.

A rezoning request for 11 parcels in North Warren was approved by the Warren County Commissioners on Wednesday.

The properties are located on the corner of Jackson Run Rd. and Rt. 62 in Conewango Township and were changed from a residential zoning designation to a business designation.

Zoning Officer Michael Lyon said the application came from David Kell, ERA Real Estate agent, for “11 individual properties.” Two of the properties have Vine St. addresses, one has a Railroad St. address and the duration as listed as Jackson Run Rd.

Lyon said the intent of the change if “proposed commercial development” and said during a public hearing prior to the commissioner’s meeting that it has “been suggested there may be a restaurant, a drive-in restaurant that may be of interest.”

He cautioned, though, that the change would open up the property to any allowable activity in a business zone.

Lyon told the commissioners that the properties – which each have individual owners – “could be sold collectively or individually” and said that the property owners have submitted written statements consenting to the zoning change.

“The project has been on the books about a year and a half,” Kell said, saying that he had a client who was “looking for space in that area for about three years.”

He said this is “one of the few places if not the only one in that area that is usable for commercial business and there’s a lot of uses there.”

Lyon noted that there are business parcels down the street so the change is “not a new introduction to that area.”

Charles Andracki, a North Warren resident, challenged the move, questioning the jobs it would bring and saying that it would result in “taking a residential neighborhood and just taking it out and I don’t think that’s right.”

Lyon said the Planning Commission reviewed the proposal twice and recommended approval to the commissioners.

Kell said that one of the parcels is listed for open sale and that four bring silent contracts and can only be sold for commercial developments. He said the rest are “waiting to see if this goes forward.”

He said if it does not go forward, it’ll be like the rest of Warren County in that it will “sit there and rot.”

When discussed during the commissioner’s meeting, Commissioner Jeff Eggleston said that he has “mulled this over for a while” and that “one of my chief concerns” is that there is “no real plan for what is being done there. Once this is changed, this will affect those properties in perpetuity. (There are) a lot of things that could happen to those properties in a residential neighborhood.”

“Generally this board… want(s) to promote business as much as we can,” he continued. “There is a pretty big residential footprint in that area. This would make a dramatic change to that.”

“This seems like a pretty big change to me with no plan of action for those properties in this case.”

Commissioner Ben Kafferlin said he is “very sympathetic to keeping a close knit community together” but said he does “believe in a property owner’s right to decide what that use is and monetize that asset.”

He asked Kell if there was no plan or just not a public plan and Kell said the plan was not public and noted that approval was needed “before we go any further.”

“The main issue to be avoided is spot zoning,” Solicitor Nathaniel Schmidt said. “(I) don’t think there is a spot zoning issue here. (The) analysis goes to what is in the general welfare and interest of the community. That seems like a bit of an open issue in the discretion of the board.”

He noted that it “seems like (there is) a substantial amount of owners that wish to sell property.”

Eggleston said he doesn’t believe most property owners in the area are aware of the proposal.

Lyon said he received two calls on the issue from property owners who were notified. One, he said, “just wanted to know what it was” and the other “wasn’t keen on the idea….”

“For me this comes down to ultimately the freedom of the property owner to monetize their asset,” Kafferlin reiterated.

The change was approved 2-0. Commissioner Cindy Morrison was not in attendance at the meeting.