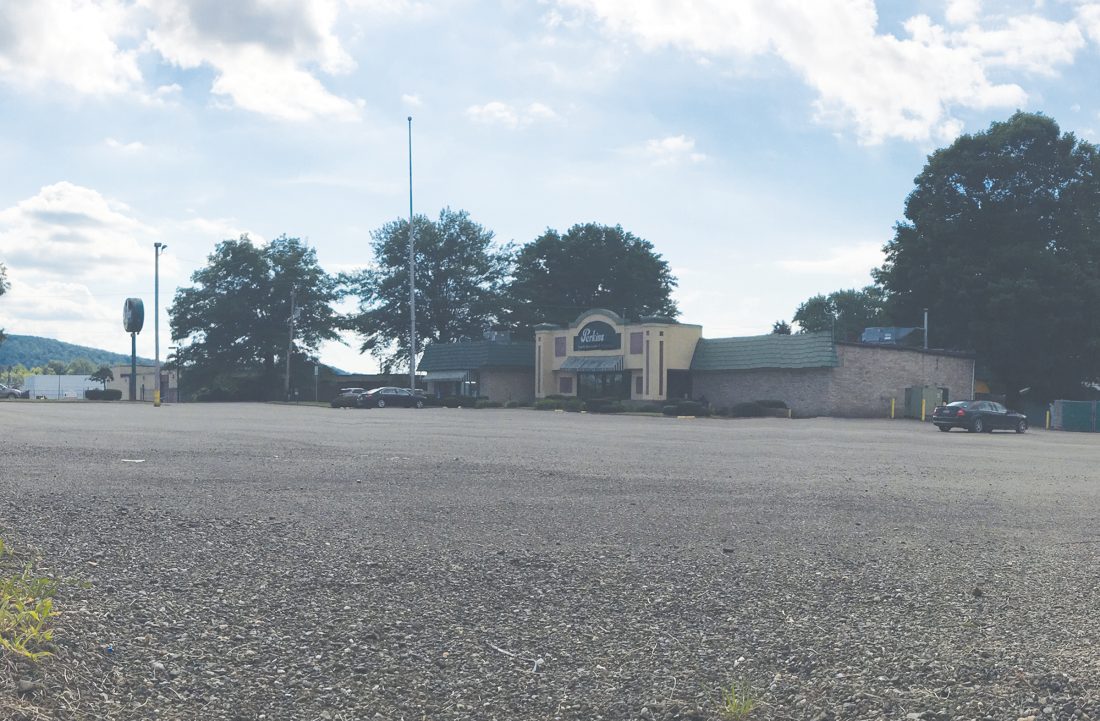 Times Observer photo by Dave Ferry The nearly empty parking lot at the Warren ‘Perkins’ on Thursday may or may not be the result of a temporary restraining order filed against its owner on July 2 after a federal judge ruled that the company was in breached its licensing agreement with the Perkins brand. Aside from the removal of the large American flag, the Perkins signage remains.

A stipulation in a federal bankruptcy case — if granted by the court — would result in the de-commission and closure of the Warren Perkins.

The owner of the Warren restaurant – 5171 Campbell Land Co., Inc. of Meadville – filed for bankruptcy protection earlier this month.

Those documents indicate that the Warren Perkins would be one of 10 of Campbell’s 27 restaurants that will be “closing… And removing all exterior signage and identification at the de-commissioned restaurants.”

That filing came on the heels of a temporary restraining order from a federal judge in Tennessee that prohibited 5171 Campbells Land Co., Inc. from continuing to operate its restaurant as Perkins.

The court ruled on July 2 that the company had “breached” its license agreements with Perkins & Marie Callender’s LLC (PMC) and was “restrained from continuing to directly or indirectly identify the Restaurants as current or former Perkins restaurants” and was further limited from “continuing to use any trademark owned by PMC.”

The order detailed a host of other items that could no longer be utilized by the restaurants such as, for example, the oversized American flag, the bakery case, signs, menus, fixtures, furniture, equipment, advertising and stationary, among other items.

According to the stipulation, Perkins will allow Campbell to operate the restaurants under a different name if they comply with the temporary restraining order within 10 business days from the approval of the consent order approving the stipulation.

The stipulation would require court approval.

It offers interesting insight into just how quickly financial problems mounted for the Campbell firm.

It explains that the license agreements were purchased in January 2019 after Unique Ventures, LLC also went bankrupt.

“Soon after the license agreements were executed, (Campbell) defaulted under the terms of the agreement” by failing to pay royalties and through the “use of unapproved products in the restaurants….”

Notice of that default was served by Perkins in May and the license agreements were terminated by Perkins the following month. However, Campbell struck a deal with Perkins for a temporary licensure conditioned on royalty payment compliance, financial statement and other items.

By October, the stipulation states, Campbell had defaulted on those conditions, as well. Last month, Perkins “provided debtor with a Notice of Termination of Temporary License letter for all restaurants” as well as a “de-identification letter.”

After that notice, Campbell “did not comply with their contractual post-termination obligations” and “continued to operate all 27 restaurants as Perkins Restaurants…”

There’s a hearing set on the stipulation for July 19 as well as a pre-trial hearing on July 31 and evidentiary hearing on August 7 regarding the appointment of a trustee to oversee the bankruptcy process.