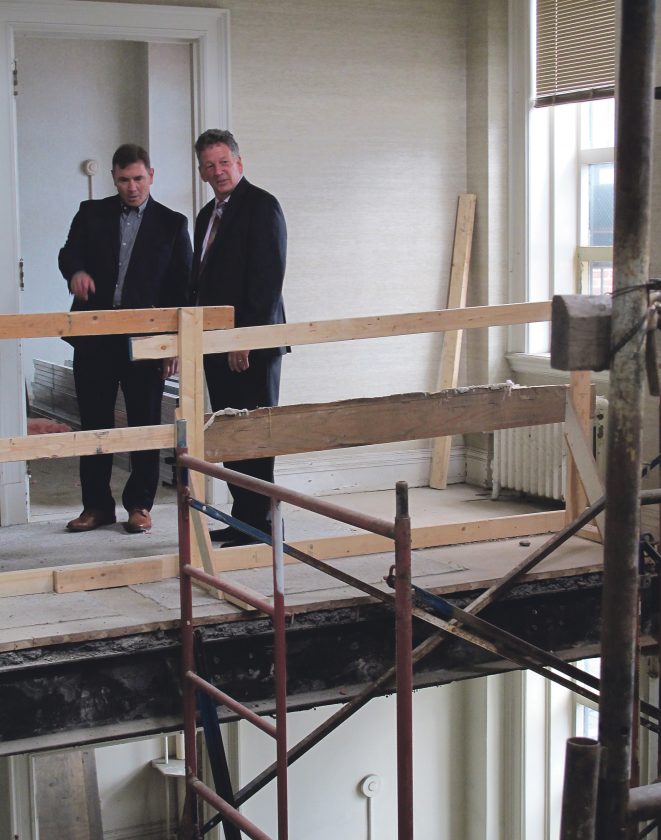 Times Observer photo by Brian Ferry In this Times Observer file photo from October 2, 2018, The Department of Community and Economic Development Secretary Dennis Davin (left) speaks with Warren County Chamber of Business and Industry President and CEO Jim Decker inside the PNC Bank Building. On Tuesday, February 19, 2019, a group of interested parties gathered to discuss several options on how to proceed.

Renovations inside the PNC Building downtown Warren are continuing with some modifications of the original plans.

A group of individuals with vested interest in those renovations met Tuesday at the building on the corner of Liberty St. and Second Ave. to discuss some of the bumps in the road and how best to proceed.

Following work done on the fifth floor of the building, which houses the headquarters of the Northern Pennsylvania Regional College, plans had been to proceed to the second floor to design a space that would allow for expansion of the NPRC and create a co-work space.

Co-working is a business model that involves individuals working independently or collaboratively in shared office space. The owner of the space provides a work environment and, usually, office equipment and amenities found in a typical office.

Warren County Chamber of Business and Industry CEO and President Jim Decker told those gathered on Tuesday that bids sent out for work needed on the second floor came back much higher than anticipated. One of the issues on the second floor is a lack of air conditioning. The cost to repair or replace a 30-to-40-year-old system presents a costly obstacle to the project, according to Decker.

Decker emphasized the importance of getting the maximum impact from grant funds being used for the building renovations.

A U.S. Department of Agriculture grant through Congressman Glenn Thompson has infused $95,000 into the project.

Despite the issues on the second floor, Decker shared plans for accommodating both a potential NPRC expansion and space for cowork on the fourth floor of the building. Five plan options will be presented to the NPRC board of directors to be considered at the board’s March meeting, according to Decker.

Warren County Commissioner Ben Kafferlin, who has been an advocate for the cowork plan, said there are a couple organizations ready to sign up for cowork space.

Kafferlin suggested starting renovations on the first floor could be the quickest way to have space available sooner as opposed to later. “I’m concerned with the time frame,” he said. “I’d prefer to get some space usable.”