A collision between a semi and an SUV Sunday afternoon left two deceased and one with serious injuries.

At 4:32 p.m. Sunday, Dec. 15, first responders were called to State Route 6 near Mead Boulevard for a two-vehicle collision between a semi and an SUV.

The operator of the SUV, Stephen C. Rothrauff, 39, of Tiona, lost control of the vehicle which began to spin clockwise, sliding into the westbound lane into the path of the oncoming semi. The SUV was struck on the driver’s side causing major disabling damage. The SUV continued to spin clockwise before coming to final rest engaged with the guide rail on the south side of the roadway facing west.

Early reports indicated that a coroner was called to the scene. Route 6 was shut down due to the collision.

Warren County Coroner Melissa Zydonik pronounced the operator of the SUV and front-seat passenger, Jessica L. Camp, 32, of Tiona, deceased at the scene.

A 15-year-old female, of Tiona, a passenger in the rear seat of the SUV, was ejected from the vehicle with suspected serious injuries and was life-flighted by STAT MedEvac to UPMC Presbyterian, Pittsburgh.

Bryan T. Crabtree, 47, of Oil City, was the operator of the semi and suffered suspected minor injuries.

The SUV suffered heavy disabling damage and the semi suffered moderate front end damage. Both vehicles were towed from the scene by Koebly Towing.

The cause of the collision was determined to be environmental – slippery, snow-covered roadways.

Route 6 is no longer closed to traffic as of 8 p.m. Sunday.

According to the National Weather Service out of State College, motorists can expect the period of lake effect snow to taper off this evening to mostly clear skies throughout the night. Monday morning will be mostly clear with some light flurries with little to no accumulation.

Later on into Monday night, more moisture will accumulate into the night leading to the chance of some sleet or freezing rain Tuesday.

The City of Warren Fire Department is on the cusp of having a safe aerial truck again. While the truck Warren City ... 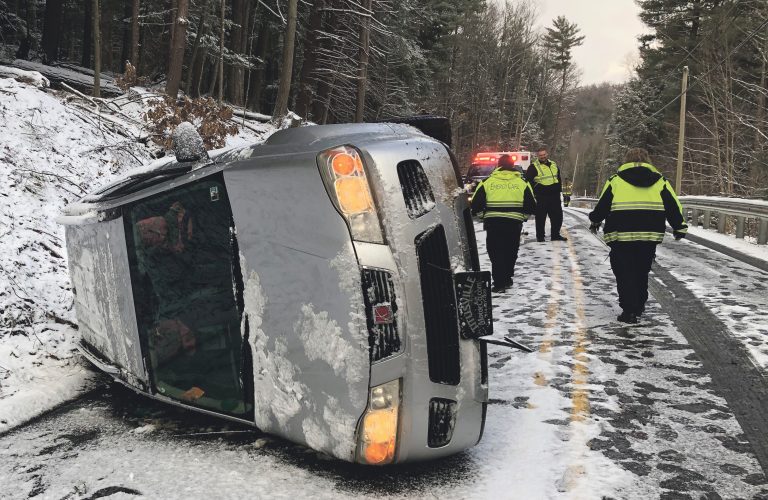 When police responded to a Youngsville dispute on Wednesday, they found it involved someone they needed to pick up ...