A Youngsville man has been charged for allegedly having sex with a 14-year-old girl.

Nicholas L. Cox, 20, of Youngsville, is charged with statutory sexual assault –4 to 8 years older; interference with custody of children; two counts of corruption of minors; unlawful contact with minor — sexual offenses; and indecent assault — person less than 16 years of age.

According to the affidavit of probable cause, the alleged victim, a 14-year-old girl, told Pennsylvania State Police she was with Cox from Friday, June 21, through Sunday, June 23, at his residence in Youngsville. She told police Cox was there when she was given alcohol and marijuana, and that she was intoxicated and naked in his bed on the night of Friday, June 21.

“Juvenile female would not or could not provide details of sexual contact, though she stated she believed ‘they had sex,'” police said in the affidavit.

Police said surveillance video confirms the two were together at various locations over the weekend.

According to police, Cox told the alleged victim’s mother that he did not know where she was on the morning of June 23.

Cox was taken to Warren County jail after failing to post $35,000 bail.

A preliminary hearing is set for 10 a.m. Wednesday, July 17.

Brothers captured for Sugar Grove robbery, other cases in Buffalo

Two brothers charged with armed robbery at the Sugar Grove Kwik Fill have been detained. Charges have been filed ...

Conewango Township police reported that a fire Feb. 29 in the 100 block of Allegheny Drive was caused by a child ... 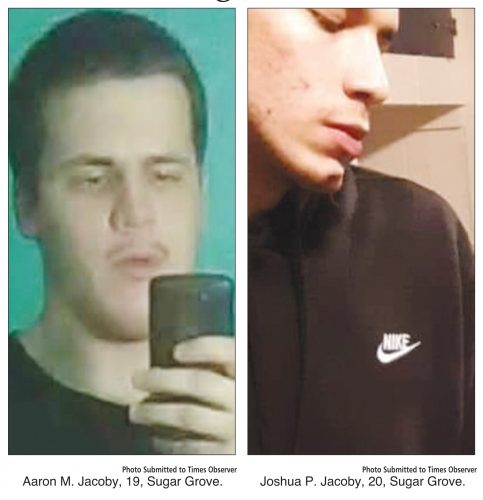 Wall fire put out in Ludlow

Firefighters took less than an hour to knock down a fire early Monday in Ludlow. They were called to 10 S. ...