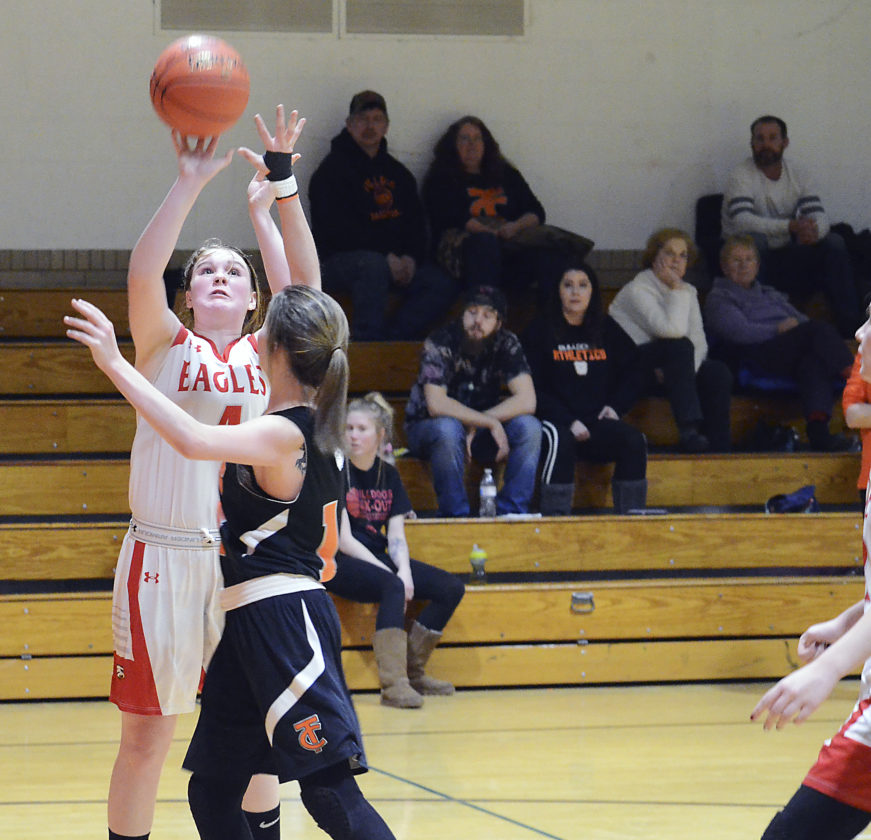 Times Observer photo by Brian Hagberg Youngsville’s Erin Dunn (4) puts up a jump shot over Tidioute Charter’s Nakiesha Krouse (14) during the second quarter of their game at Youngsville High School, Monday, Jan. 14, 2019. Dunn had 10 points to help propel the Eagles to a 58-31 Region 2 win over the Bulldogs.

With 6:15 to go in the first quarter Monday, Nakiesha Krouse drained a 3-pointer to give Tidioute Charter a 5-2 lead at Youngsville.

By the time Krouse made a free throw with 2:30 to go in the fram, the Eagles had built a 10-6 lead they wouldn’t relinquish on their way to a 58-31 Region 2 win over the Bulldogs.

“When we were patient, we broke their press and got some easy shots,” Youngsville coach Andy Sveda said. “That got us into the flow of the game.”

Following Krouse’s 3-pointer, the Eagles (3-11 overall, 3-6 Region 2) twice made a pair of passes down court to break the Bulldogs’ (1-11, 0-9) press defense and convert easy layups. Defensively, Youngsville clamped down and TCCS went nearly four full minutes without scoring a point. Krouse converted both free throw attempts to make it a one possession game at 10-7, but the Eagles hit a pair of late jumpers to hold a 14-7 lead after one.

Krouse accounted for all seven Bulldogs points in the first. 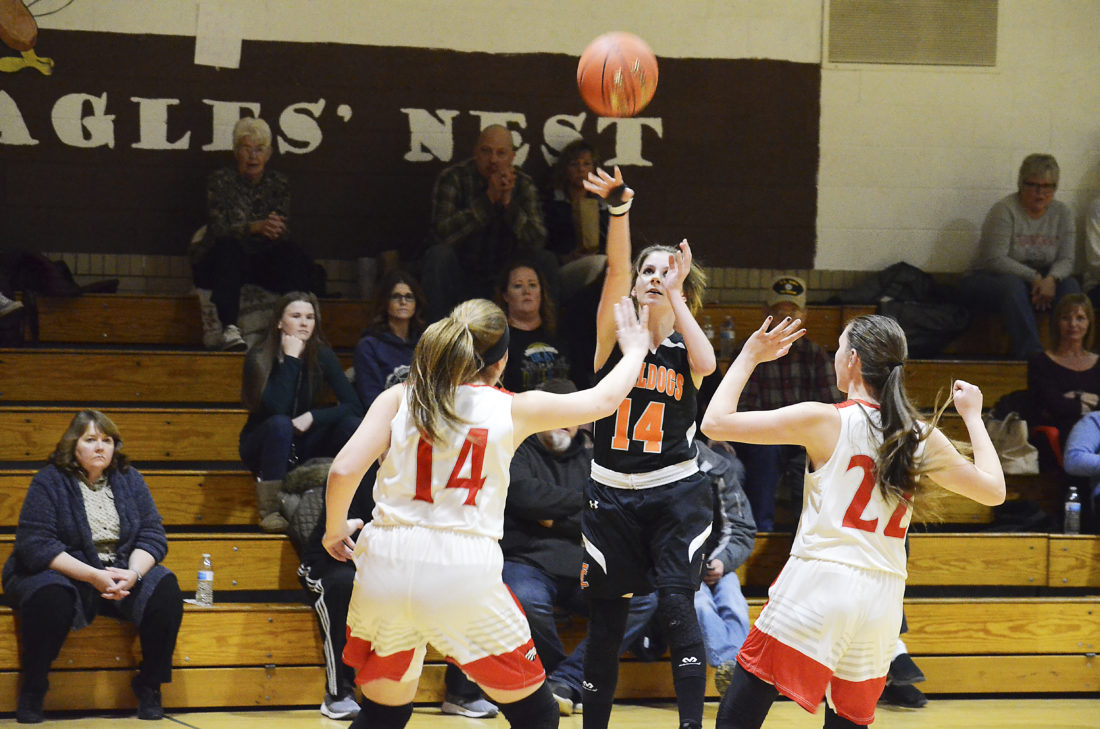 “The (girls) need to learn not to rely on just (Krouse) to score,” TCCS coach Christy Valentine said.

Youngsville carried the momentum into the second quarter and essentially put the game away. The Eagles added another seven points on top of the final four from the first quarter for an 11-0 run and 21-7 lead. Kelsey Nuttall hit a free throw with 3:38 to go in the half for TCCS’s only point in the second. The Eagles continued to pile on the points and led 32-8 at the half.

“We had a difficult time finding a rhythm,” Valentine said.

Sveda credited Kamryn Weissinger for shutting down Krouse after the early part of the game.

“Kamryn did a really good job on Krouse,” he said. “She really contained her. Like most high school teams, they’ve got one or two top players they thrive on and if you can shut them down they have a hard time scoring.” 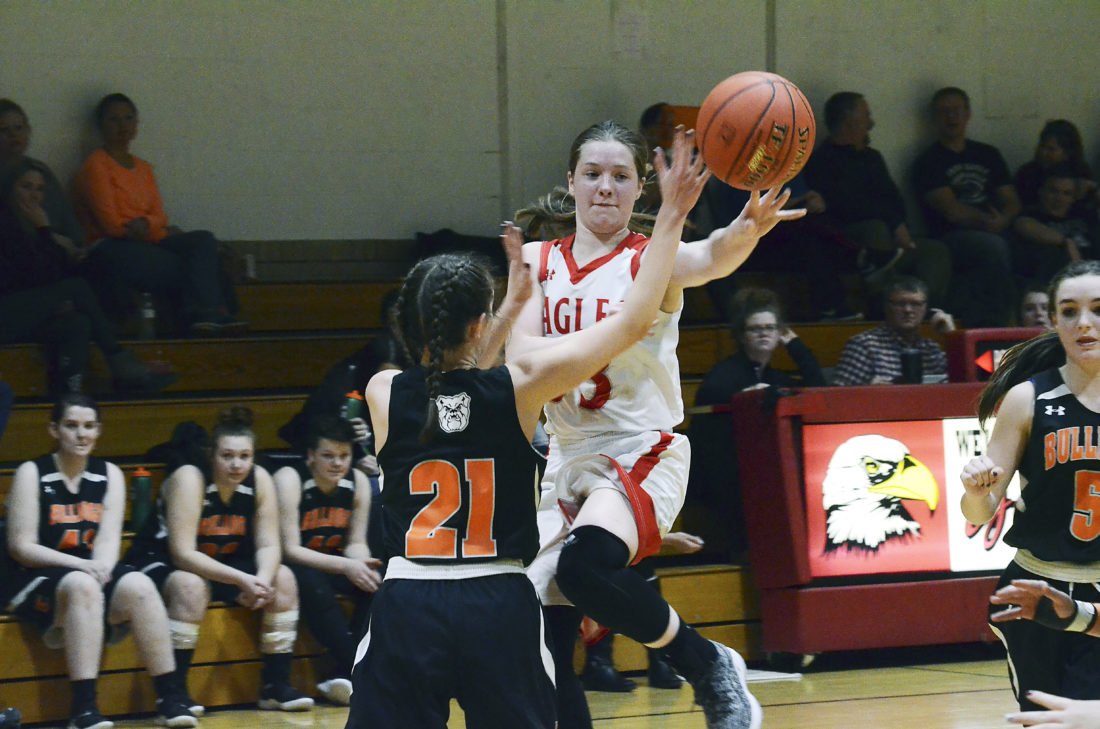 TCCS found a bit of an offensive rhythm in the second half, but was unable to get enough stops to climb back in it.

“We had some of the other girls step up,” Valentine said.

Krouse had a team-high 17 points and five assists.

“We’re trying to get her to distribute more,” Valentine said. 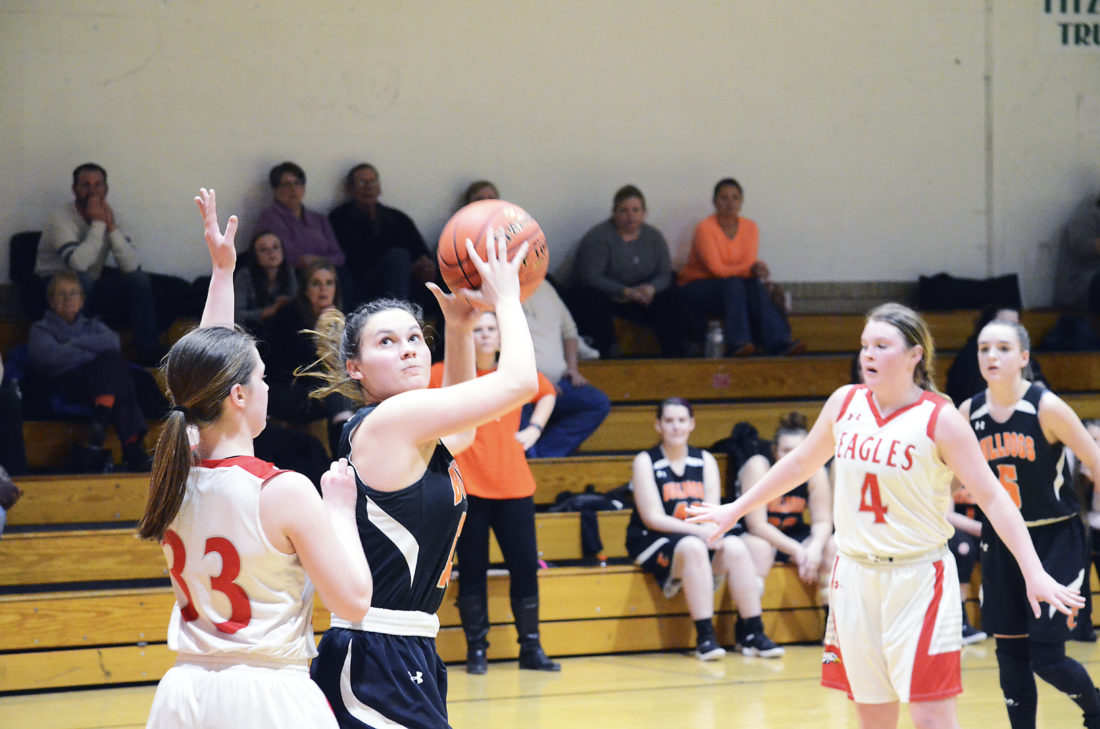 Times Observer photo by Brian Hagberg Tidioute Charter’s Shelby Proctor (13) looks to the basket while being guarded by Youngsvilles’ Sadie Hoffman (33) during the third quarter of their game at Youngsville High School, Monday, Jan. 14, 2019.

“It was nice to see (Sabella) getting involved shooting tonight,” Valentine said. “That’s two consistent games in a row for her.”

“Sadie played really, really well,” Sveda said. “She was taking care of the ball and distributing.”

Both teams are back in action Wednesday. TCCS hosts Union while Youngsville heads across Route 6 for a matchup with Sheffield.

Sabella had a game-high 18 points for TCCS.