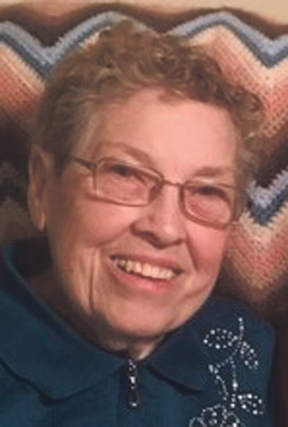 Marilyn L. Miller, 85, of Youngsville, PA, entered into eternal life with her Lord and Savior on Wednesday, July 24, 2019. Born in Warren on March 13, 1934, she was the daughter of the late Melvin and Marian (Edgett) Smith. Marilyn was a graduate of the class of 1952 of Warren High School. She worked as a teacher’s aide in the Warren County School District at Youngsville Elementary and also was the manager for the Warren County Guide for several years. Marilyn loved being a homemaker and will be remembered for her delicious pies. She was a member of First United Methodist Church in Youngsville, where she was very active in her church, was a Past Worthy Matron (twice) of the Youngsville Order of the Eastern Star Chapter #478 of Youngsville and also formerly served as Judge of the Youngsville Board of Elections. Marilyn was a former member of the National Campers and Hikers Assoc. She founded the Alzheimer’s Support Group of Warren County. She and her husband were former members of the Saturday Night Dance Club in Warren. Along with her husband, she was also a member of the Brokenstraw Antique Tractor Club and was a proud wife of a Shriner Clown. She was an avid gardener, enjoyed crafting and sewing, was a master at canning foods, a great cake decorator, amateur photographer, videographer, photo album creator and family archivist. Marilyn will be remembered for her ability to just look down and find a fourleaf clover.

She was the wife of James L. Miller whom she married in the First Baptist Church in Warren on July 12, 1952 and with whom she had just celebrated her 67th wedding anniversary. In addition to her husband, she is survived by 3 daughters, Grace (John) Backstrom of Warren, PA, Gayle (Larry) Kerman of Getzville, NY, and Geraldine (Chad) Lyter of Allegany, NY; a son, Glenn (Judy) Miller of West Grove, PA; a sister, Annette Angora of Rochester, NY; a brother inlaw, David (Bonnie) Miller of Youngsville; 11 grandchildren, MaryLynne Kerman, Kristen (Greg) Spears, Sarah (Jason) Monticue Knox, Brian (Laura) Lyter, Michael (Kristan Callahan) Kerman, Gabrielle (Zach Schifferle) Kerman, Lauren (David) Bowman, Katie Lyter, Mallory Kerman, Marlene Miller, and James R. Miller; 3 great grandchildren, William Spears, Annalee Lyter, and Alexandra Spears, and a great grandchild to be born in February of 2020 and several nieces, nephews and cousins. In addition to her parents, she was preceded in death by 2 brothers, Charles Smith and Melvin Ned Smith, and a sisterinlaw, Anita Smith.

Friends are invited to call for a time of visitation on Sunday, July 28th, from 24 & 68 pm at McKinney Funeral Homes and Cremation Services, Inc., 54 West Main St., Youngsville where an Eastern Star Ritual will be held at 5:45 pm. A funeral service will be held at First United Methodist Church, 225 E. Main St., Youngsville, PA. at 10 am on Monday, July 29, with Rev. Jeffrey Canter, Pastor officiating. Graveside Services will follow at Warren County Memorial Park. The family suggests those wishing to place a memorial may do so to First United Methodist Church of Youngsville or Shriners Hospital, 1645 W 8th St., Erie, PA 16505 Condolences may be left at www.mckinneyfuneral.com