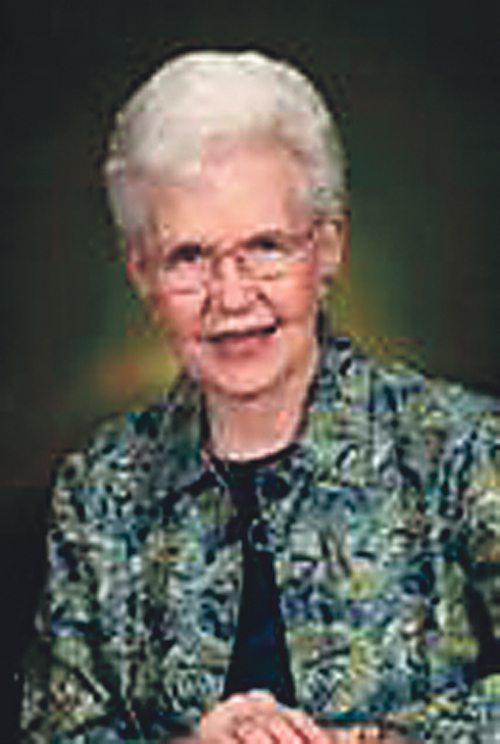 Marjorie Eleda Brenan, 90, a lifelong resident of Warren, passed away on Thursday, October 26 at Reston Hospital in Virginia. Born in Warren, December 19, 1926, Marge was the only child of the late John Albert and Eleda May (Simmons) Larson of Warren. At the age of 8, she lost her mother to blood poisoning. Marge graduated Warren High in June 1945 then attended Allegheny College until her father’s passing in December 1945. On June 19, 1946, “Margie” married her childhood sweetheart, Robert Ray Brenan of Tiona, at Warren First United Methodist Church, the church she and her father had attended and where she would raise her family. The couple moved to Cleveland to finish their degrees at Western Reserve College and Case University. With a teaching credential, a Spanish major and a French minor, Marge began her teaching career in Cleveland. The couple moved back to Warren where she then taught for the Warren County School District for 40 years and belonged to the Warren Teacher’s Association.

She taught many subjects and grades from high school to kindergarten, French language elective to full day primary school. Most of her career was spent at Market Street and Pleasant Township schools. After her retirement, she volunteered as a reading specialist tutor at Market Street School. She also volunteered at the Warren Senior Center, helping seniors to file their taxes. A member of First UMC since 1939, Marge actively participated in the choir and a variety of study groups as well as teaching Sunday school and Vacation Bible School. She was an avid reader, a bridge player, an accomplished baker and a lifelong supporter of the arts. She belonged to and participated in Philomel Society, University Women’s group, Women’s Club of Warren and an unnamed but much beloved Book Club. Those who knew Marge found her to be bright, articulate, warm, funloving and absolutely meticulous about everything she did.

The great loves of her life were her family and friends. Those who survive her include children: Michael (Susan) Brenan of Grand Island, NY; Kathryn Brenan and Thomas Gurlitz of Reston, VA; Sara Morrow of Jerusalem, Israel; her grandchildren: Allison Gurlitz of Charlottesville, VA; Michael Gurlitz of Seattle, WA; Zach Morrow of Los Angeles, Sam Morrow of Jerusalem, Levi (Tikva) Morrow and Marge’s first greatgrandchild, Orit Ahava, also of Jerusalem; her beloved sistersinlaw: Peggy (John) Till of Goldsboro, NC and Beverly Brenan of Franklin, PA; and her nieces and nephews. Marge was preceded in death by her husband, Robert (May 1, 1990), a soninlaw, Reuven Morrow (May 6, 2016) and her much loved pets: Winkie, Bing, Muffin, and Sassy.

Visitationis scheduled at the Peterson-Blick Funeral Home, 1003 Penn Avenue East, Warren, for Tuesday, Oct. 31st, 4 to 6 p.m. and again for Wednesday, Nov.1st at First UMC from 10 11am. The funeral service begins at 11am at the church. Burial in Oakland Cemetery takes place immediately after services. Attendees are invited to a short reception back at the church. Those wishing to make a memorial donation are asked to address it to: The Marjorie Brenan Memorial Fund, First United Methodist Church, 200 Market Street, Warren, PA 16365.