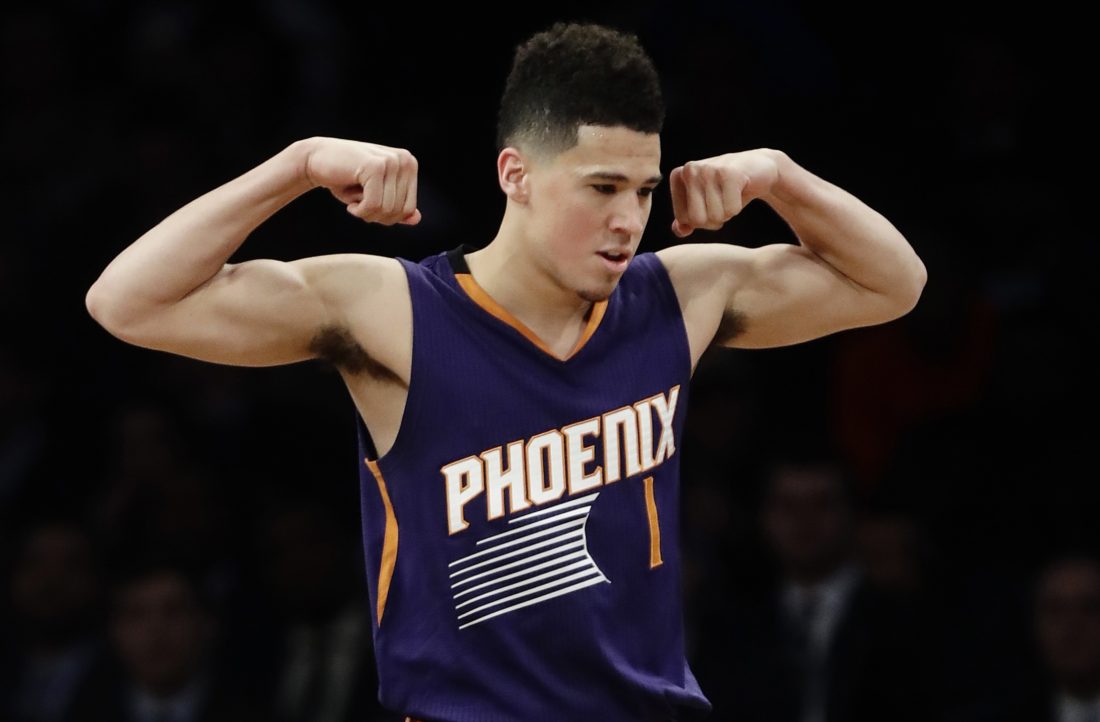 Phoenix Suns' Devin Booker (1) celebrates after scoring during the first half of the team's NBA basketball game against the Brooklyn Nets on Thursday, March 23, 2017, in New York. (AP Photo/Frank Franklin II)

In the locker room after the game it was a celebratory mood, as teammates surrounded Booker, who held up the number ’70’ much like Wilt Chamberlain did after his 100-point game.

But even more importantly, do you know what both Booker and Westbrook had in common following these performances?

That’s right, not only do we have players celebrating after a loss, but we also have a well respected national media outlet fawning over a player, saying he ‘won’ an MVP duel.

The reporter from USA Today, who I won’t name, should be embarrassed. But it’s not an uncommon thing for many in the national media to be hoodwinked by flash over substance. Westbrook, who hasn’t won anything in the NBA, gets far more press than the San Antonio Spurs, who recently clinched their 20th straight playoff appearance and have five NBA titles during that span.

James Harden was asked about the battle with Westbrook after the game and he said, and I’m paraphrasing here, ‘I just care about winning.’

What a novel concept.

When did this become the new norm? When did people start celebrating individual stats over team success?

That’s like an attorney at a fledgling law firm bragging about having the highest conviction rate.

That’s something losers do.

Great, you scored 70 and your team lost. Who gives a rip?

Devin Booker plays for one of the worst teams in the NBA and there he is with his teammates celebrating after a loss. It’s part of the ‘look at me’ crowd that seems to be ever pervasive.

Care more about winning and making the people around you better and you will be more successful in any professional setting. I guarantee it.