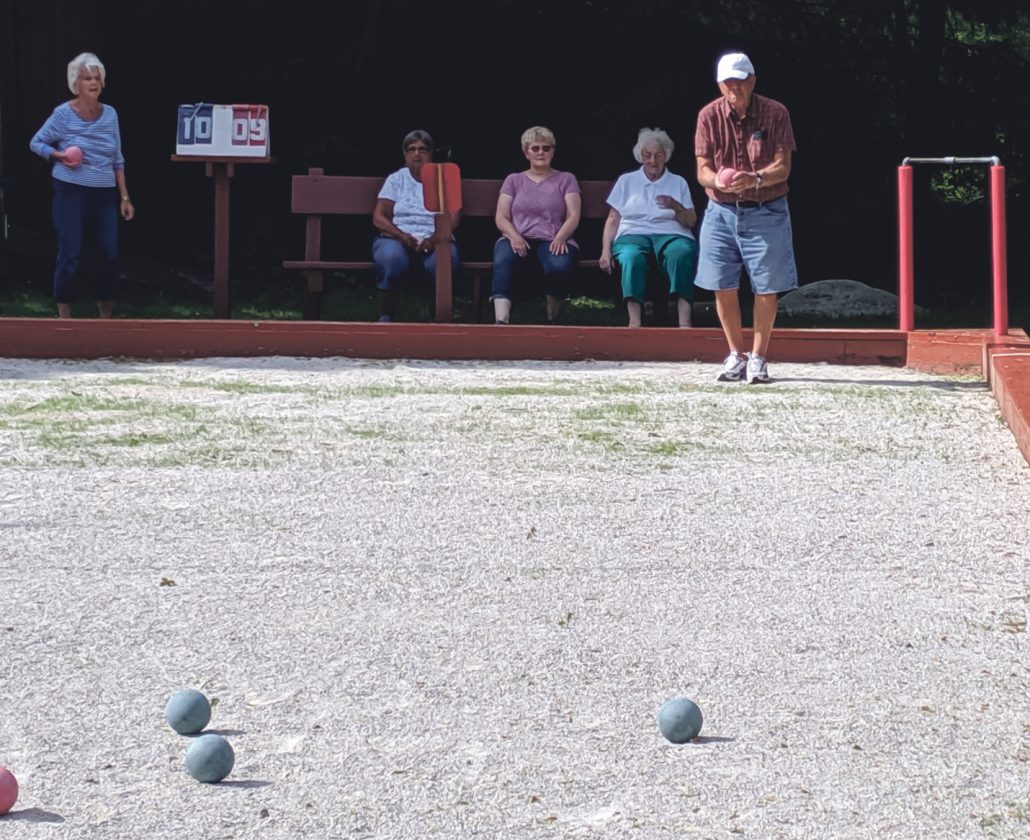 Times Observer photo by Lorri Drumm (Bocce Pete) Warren Bocce Group President Pete Carnavole took part in a game of bocce at Betts Park on Monday. The Warren Bocce Group welcomes anyone to join them at the bocce courts at the park Sunday through Thursday at 6:30 p.m

A sport that may have originated in ancient times with rocks is still around and just about any evening you can find a group of people taking part in it at Betts Park. Better yet, anyone is welcome to join in.

The Warren Bocce Group typically meets at about 6:30 on evenings when the weather is cooperative at the bocce courts in Betts Park, 100 Ludlow St., Warren. The group meets Sunday through Thursday at the courts that are located on the west side of the park.

The members of the group welcome anyone who would like to play, learn to play or even help maintain the courts. All you have to do is show up.

On Monday evening there was even a picnic following a close battle between the green and red teams.

For those who aren’t bocce experts, the game involves two teams of four. Each team has four colored balls (on Monday they were either red or green). The little white ball (pallina) is thrown first. Monday’s players seemed to prefer to try to get the pallina to a far corner. A player can toss the pallina any distance as long as it passes the center line of the court and stays within the boundaries of the court.

The player tossing the pallina must deliver the first ball. That player then steps aside and the opposing team will then deliver their balls until one of its Bocce balls is closer to the pallina or has thrown all its balls. The “nearest ball” rule governs the sequence of thrown balls.

All balls must be thrown underhanded. A team has the option of rolling, tossing or bouncing its ball down the court.

The team whose ball is closest to the pallina is called the “in” ball and the opposing side the “out” ball. Whenever a team gets “in”, it steps aside and allows the “out” team to deliver. The other team throws until it gets its ball closer (not ties) to the pallina. This continues until both teams have thrown all their Bocce balls.

After both teams have exhausted all their balls, a frame is over and points are awarded. At Monday’s gathering, teams played until one reached a total 12 points.

There’s a popular belief that the ancient Phoenicians, Egyptians, Greeks and Romans invented an early form of bocce. One theory suggests their soldiers played with rocks to pass time in-between battles.

Modern Bocce finds its origins near the cities of Torino, Italy and Lyon, France and stems from the House of Savoy dynasty, which ruled from 1003 to 1860.