Estimated storm damage may be eligible for relief 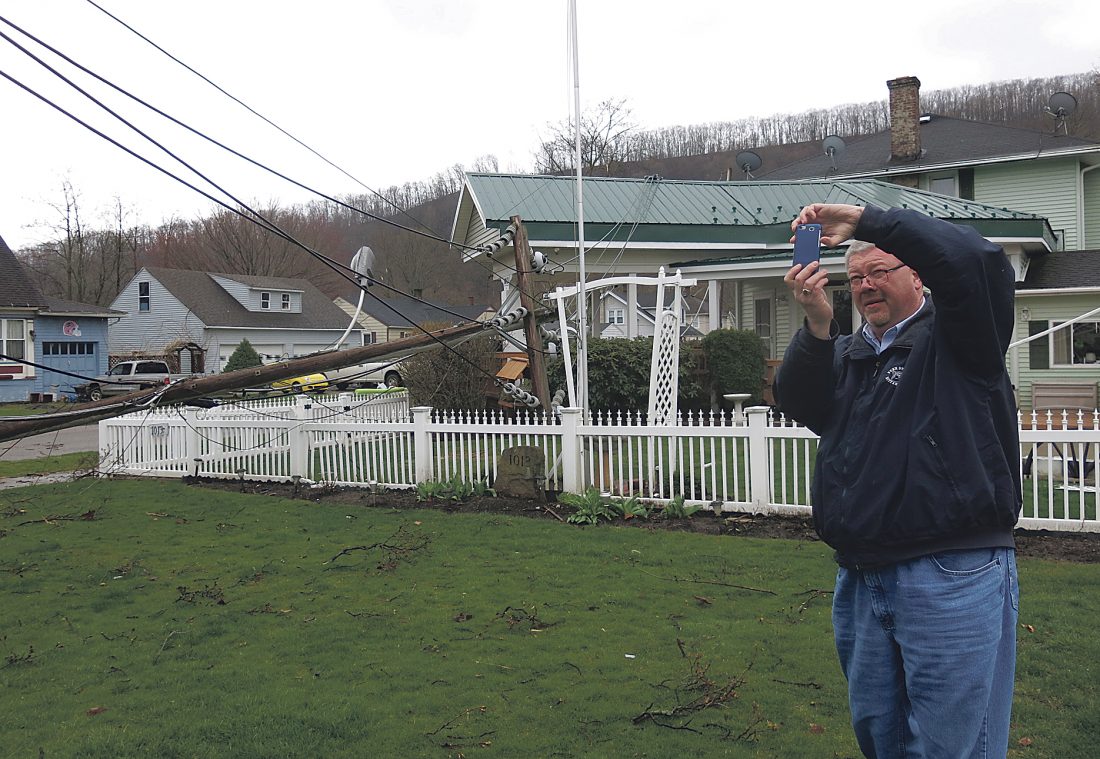 Warren County could be in line for some disaster relief following Sunday’s tornado.

National Weather Service meteorologists Pete Jung and Mike Jurewicz briefed Conewango Township officials about the conditions that caused damage in the township and throughout a swath of Warren County.

In turn, township officials reported that number of and extent of known damages in the township.

There were seven township residences that were known to have taken “significant” damage, according to that report.

There were four more homes that were known to be damaged to some extent.

Dave Reiff was at his parents’ house in Starbrick when the storm came through.

“It got dark really fast,” he said. “Everything was just going sideways.”

He said his location prevented him from seeing any rotation in the storm.

He asked a neighbor if he had seen the storm. “We were hiding in the basement,” was the response.

Large trees had fallen on houses to both sides of that neighbor, but the trampoline in the yard and the deck furniture overlooking the river had not moved.

“It took out my river room,” another neighbor said.

“It aimed for the houses,” Reiff said. “200 yards (east) and it would have gone up over the hill and missed everyone.”

Judy Crothers house was without power as the temperature dropped Monday morning. She said her house was intact, but without heat, she went to a neighbor’s house to warm up.

There were a number of places in the county where power was out during the storm. The City of Warren set up a shelter at North Warren Volunteer Fire Department because it was possible some homes in the Upper Conewango Avenue area would be without power for days.

In the City of Warren, off of Conewango Avenue, Linda and Carl Swanson spent Monday cleaning debris out of their yard.

They didn’t have power Monday afternoon. “We were told two to four or five days,” Linda Swanson said.

According to Rose, a Penelec update indicated that almost all customers would have power restored by 10 p.m. Monday.

“I’ve never seen the wind come across there like that,” Linda Swanson said. “You could just see a cloud, then, the next thing” a utility pole fell on their house.

“It came real quick and it left real quick,” she said.

“We just thank God nobody was hurt,” Carl Swanson said.

According to Warren County Deputy Director of Emergency Management Scott Rose, disaster relief is available for counties where damages are assessed at at least 40 percent of the value of at least 25 residences.

Damage to commercial properties is separate.

And, things like the gas leak along River Road that was associated with the storm do not contribute to the accounting.

The tornado’s path took it through portions of Pleasant, Conewango, Glade, and Elk townships and the City of Warren.

County emergency management will be collecting information about the damages and reporting them to the appropriate agencies, Rose said.