Dragons get big win over Erie 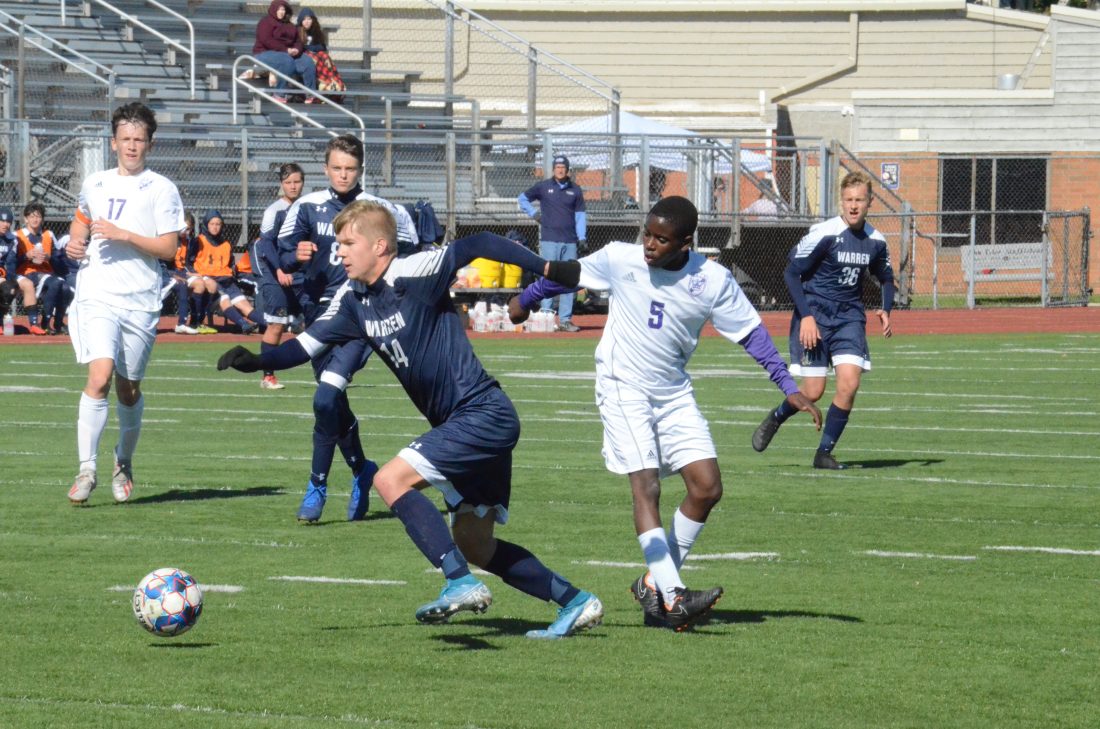 Caleb Lindell breaks away from an Erie defender Saturday during a 2-to-1 win at War Memorial Field.

The Warren boys soccer team earned a hard-fought 2-1 win over the Erie Royals on Homecoming Saturday at War Memorial Field in a game that was a nailbiter from start to finish.

The Royals came into Warren with only two losses to powerhouses Cathedral Prep and McDowell.

“We knew they are a much larger school with a lot of players on their roster,” said Warren coach Denny Flatt. “Playing these quality teams only makes us better. The coaches stressed it would take a well-played match to beat them and that is exactly what we turned in.”

Caleb Lindell was able to score twice with very hard-earned goals, while the backline of Tyler Gustafson, Alex Nebinski, and Jack Darling turned in another stellar performance.

“Our defense is working very well together, not only are they shutting down opponents quickly, they are changing possession with great steals and quality passes,” noted Flatt. “Keeper Ian Darling communicated well with his backline and recognized attacks early and directed defensive disruptions. The duo of Zane Anderson and John Page continue to control the center of the field and have been a key component in our improvement. They combined for 38 tackles and 18 steals. They are going to every ball, their play at midfield allows us to win the possession game.

“Wingers Ryon Flatt and Parks Ordiway shut the Royals perimeter game down the entire match. Both of them played an excellent transition game and worked the ball downfield very well.”

The first thirty minutes of the match was controlled by the Dragons.

“We had some good looks but could not quite convert,” coach Flatt said. “A lot of our scoring opportunities were the result of forward Wesley Kiehl making quality, creative runs. Now that Kiehl is healthy, we are much more potent on top.

“JT Blum had his best performance of the season and is playing with confidence and determination which pays off by him winning many balls. These games are scary when you control all aspects of the game, but that converts to nothing on the scoreboard. I credit our team with staying patient and sticking to our game plan.”

Their tenacity paid off at the 31:14, when Lindell found the net after an assist from John Page.

At the 37:35 mark, Erie evened the score with a goal from Ahmed Saadoon. Their goal was scored because of a communication breakdown.

“That miscue was probably the only complaint I had the entire match, and we learned from it,” said Flatt. “After a game-tying goal, morale can suffer, but that seemed to ignite us.”

The Dragons responded in a big way, scoring less than a minute later thanks to Lindell’s second goal with an assist from Blum.

“I could have not written it up any better,” Flatt said. “They did not point fingers, argue or feel sorry for themselves they took care of business and the lead.”

The half closed with the Dragons leading a 2-1.

Very minor half time adjustments were made and the team readied for the expected Royal push. Erie came out hard in the second half and the Dragons responded accordingly. As time began to decrease, emotions began to increase.

Both teams were one goal away from changing the game, but neither team could put one in.

“I credit our willingness to go to every ball and pass, fight for every fifty-fifty ball, and play with grit as the difference-maker,” Flatt said. “We have a rematch at Bradford on Tuesday and really like how we are progressing as we ready for the playoffs.”

After scoring on an early corner by Holden Creal, the match quickly became a defensive battle. Warren’s defense of Joe Letko, Kohl Lyon, Ethan Best, Holden Creal, and Will Nebinski proved too difficult for the Erie Royals attack.

Late in the second half, Alex Ferry was able to find Ricky Madril to make the score 2-0 where it would remain for the rest of the match.

“After a couple of tough previous matches, we were able to get the win. It feels good to translate improvement in practice to game day wins,” said coach Darling.

Alex Ferry and Will Nebinski combined for the shutout in net.