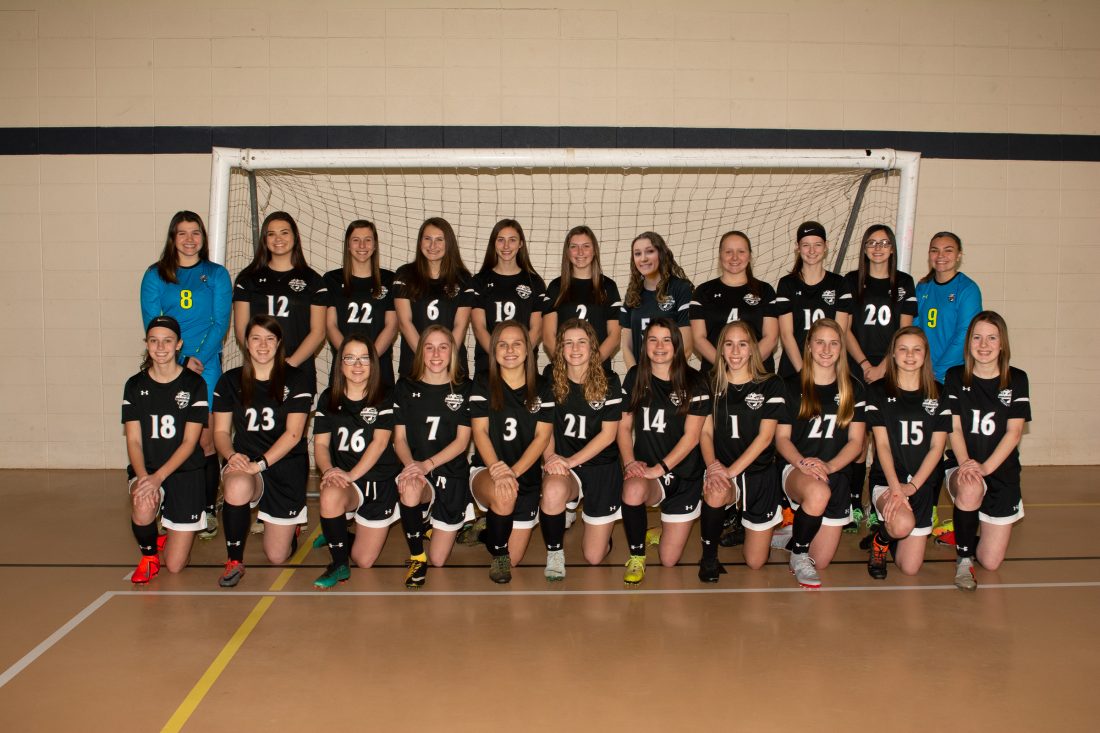 Warren’s Kyleigh Wilson (27) will be playing for the girls team in the Pennsylvania-New York Corporate Cup this Saturday at Pitt-Bradford.

The Third Annual NY-PA Corporate Showcase Soccer Match will be held this Saturday, May 18, at the University of Pittsburg-Bradford, Kessel Athletic Complex.

This event will feature premier players from two states competing for bragging rights. For the second consecutive year, Warren Area High School will be represented. Kyleigh Wilson is a member of the girls’ team and Caleb Lindell is on the boys’ team. Denny Flatt, the Varsity Coach of the WAHS Boys’ team was selected as an assistant coach for the boys’ squad.

Coach Flatt stated both Wilson and Lindell are very deserving to be on the team. “They both competed in a series of tryouts with talented players from Brockway, DuBois, St. Mary’s, Bradford, and numerous other schools,” he said. “They made the 22-person roster.”

Flatt pointed out that soccer standouts from the 2018 class, Connor Guiffre and Seth Harrington played in the game last year and represented their town and school very well. Flatt spoke with Jeremy Bickling, the WAHS girls varsity coach, regarding Wilson. Bickling described Kyleigh as a well-rounded, team player. In fact, she received team honors as an offensive and defensive player both her freshman and sophomore years.

Kyleigh’s speed, agility, and winning attitude were valuable to the successful WAHS team. Kyleigh can always be counted on to give 100 percent effort when on the field.

Flatt described Caleb as a very good ball handler and excellent forward. Quite simply, he knows how to put the ball in the back of the net. He is a threat from long range and capable of beating defenders for point blank opportunities. He scored 24 goals last year and has a good chance of breaking the single season scoring record this year. He loves to play soccer and works very hard at his craft.

Flatt stated that 14 college coaches have committed to the event with numerous others planning on attending.

“We are expecting over 1,000 spectators for both matches,” he said.

Flatt encourages people to attend the event and cheer on these two hometown athletes.

“Soccer has grown so much in our community with the YMCA leagues, Kinzua Travel League, and the success of boys’ and girls’ teams at Eisenhower and WAHS,” he said. “This event should serve to inspire the younger players in our area to one day play in this event.”

Pregame festivities begin at 12:30, the girls’ game will be at 1 p.m. with the boys starting at 4:00 p.m. The event is free and there will be raffles, food, and merchandise venders.