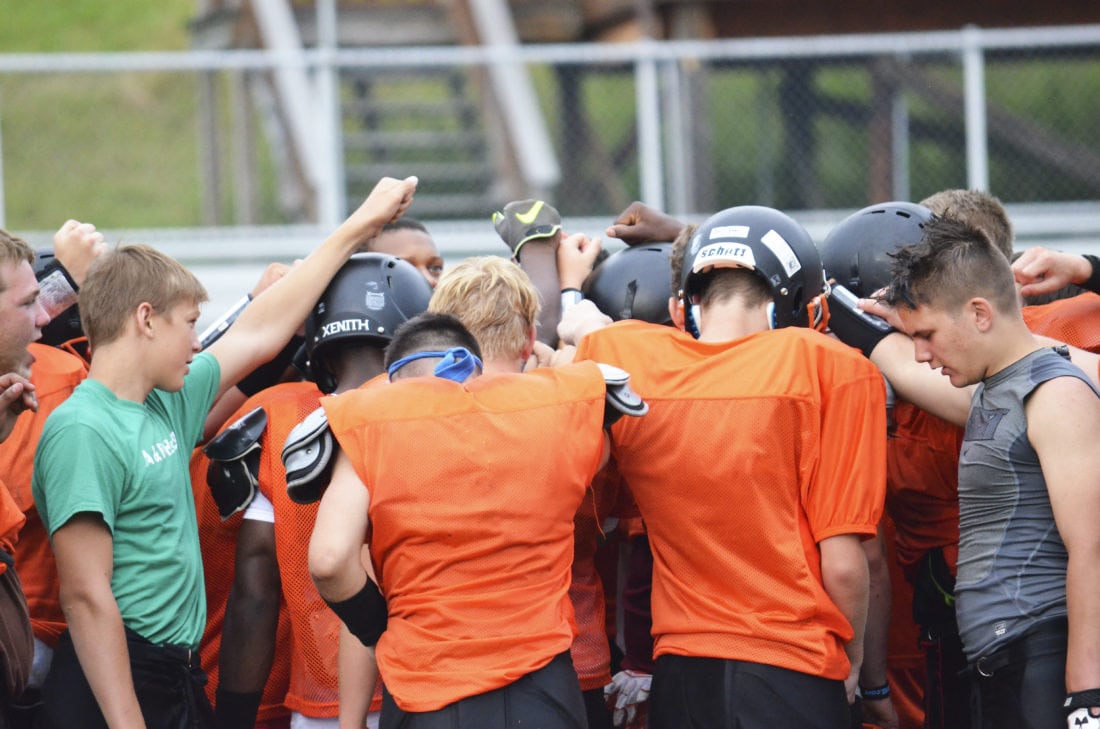 Sheffield players break it down after a summer conditioning practice in early August of last season. Their will be a meeting tonight with members of the Warren County School District at the Sheffield High School auditorium at 7:30 p.m. to help determine the viability of the program moving forward.

Two years ago, a pair of forfeits sparked an inquiry into the state of a Warren County football program.

That inquiry took a long and winding road, full of twists and turns, and ultimately led to the end of the Youngsville varsity football team.

Flash forward and concerns about the number of athletes participating in offseason conditioning programs has led to a meeting between Warren County School District officials and another varsity football team.

Nothing short of the future of Sheffield varsity football is at stake when the two sides meet in the Sheffield High School auditorium at 7:30 p.m. Thursday.

Hoping to avoid a similar situation to the one that occurred in Youngsville, district officials began reaching out to Sheffield football coach Chris Korbar and athletic director Corey Copley as soon as they heard about waning participation.

“The district is concerned about the current number of students attending (offseason workouts) now, so we are having conversations earlier rather than later,” WCSD Superintendent Amy Stewart told the Times Observer. “It is very difficult to predict the number of players based upon sign-ups. Typically, the actual number of players turns out to be less than the number who signed up. There are indicators along the way, and the number of students attending the non-mandatory, pre-season activities is one of those indicators.”

When the issue was brought to the district’s attention, the Wolverines had five to six players regularly attending offseason conditioning sessions. Following a team meeting June 26, Korbar said he had 15 players firmly committed to playing this season. Twelve attended the meeting and he said three more told him they were playing but couldn’t attend due to other obligations that night. He posted to the team’s Facebook page Wednesday that the team “had four to six kids verbally commit” since that team meeting.

Assuming all those who have said they want to play will play, that would give Sheffield approximately 20 players. Factoring in the 12 players expected to be on the roster from Abraxas, the Wolverines would enter the season with 32 players, four more than they had in 2017 and nine more than they opened with in 2016.

“We’re going to have a decent turnout from what I’m gathering,” Korbar told the Times Observer last month.

The big question heading into tonight’s meeting remains. Is it enough to convince the district Sheffield can field a team without jeopardizing player safety or potentially forfeiting games?

Youngsville entered the 2016 with plenty of hope for the future, but not a lot of bodies to build it. The Eagles began that season with 24 players on the roster. After five games, “injuries, illness and school related confidential issues” had reduced that number to just 15. In September, the Eagles began a “week-to-week evaluation” of the team. By October, they were forfeiting games.

District 10 requested an inquiry into the situation. As a result, the WCSD administration recommended that the Youngsville football program enter into a co-op with Warren. The recommendation was not made lightly.

To date, Sheffield hasn’t faced a numbers situation like Youngsville did in 2016. Both teams entered that season with approximately the same number of players on their respective rosters. It’s possible Sheffield had lady luck on their side that year and Youngsville didn’t. There also wasn’t as much scrutiny from district officials as there is now. The school board had lengthy discussions this spring about possible across-the-board co-ops with all four county schools (Youngsville and Eisenhower would form one co-op and Sheffield and Warren the other). One of the key points administrators and some board members was that they wanted to be proactive in an effort to avoid another situation where a team had to forfeit games due to lack of players. The driving factor isn’t cost savings or a long-game to school closure, but the safety and well-being of the students.

After speaking with some Youngsville students and assessing the data, a grim picture began to appear. Athletes were participating in multiple sports, often not because they truly wanted to, but because they felt they had to.

During a Jan. 30, 2017 school board meeting, Stewart said she spoke with a group of girls who were in both volleyball and cheerleading. They told her “we have to do both because if we don’t we won’t have these opportunities,” she said.

WCSD administrators and board members aren’t only concerned with numbers when it comes to evaluating the viability of a program.

The athletes taking the field, court, pitch or diamond should be able to handle the physical and mental demands of playing at the varsity level.

“The amount of pressure that is on our students to fill those seats is immense,” Stewart said during a board meeting earlier this year. “It concerns me in terms of what kind of pressure we are putting on these kids. I don’t want students to feel like they have to sign up. Especially in a contact sport like football. We want you to play football because you love football.”

Korbar said he’s not been given a specific number needed to keep the program going, though he said it’s been rumored the district would like “16 capable athletes” to feel comfortable allowing the Wolverines to take the field.

If the past is prologue, the number of players in attendance tonight might not matter at all.

Once the district announced it was looking in to shutting down the Youngsville football program, the players and community rallied. People spoke out against the proposed co-op and an effort was made to get young men to rededicate themselves to playing Eagles football.

The board continued to press forward with the proposal and despite more than 30 players in attendance at the March 12, 2017 meeting, the board voted to end the program.

Sheffield isn’t likely to get 30 players to their meeting tonight. Even with Abraxas, that’s a number they haven’t had in a few years. No firm decisions are likely to emerge either. The district officials will take what they learn and present it to the full board at the July 30 board meeting.

What the Wolverines can, and must, accomplish if they want to have traditional Saturday matinees on Wolverine Mountain this season is prove to the district that they have not only the numbers, but the will, desire and ability to field a team without putting unprepared players in harm’s way.

“The powers that be are going to make the decisions they have to make,” Korbar said. “I’m just trying to be proactive and do what I can to get people to step up.”

Ultimately, the decision is in the hands of the district.

“This is a matter of… it’s our responsibility to make a decision that’s in the best interest of kids,” Stewart said. “To knowingly put our kids out there in the future, knowing where we’ve been, just doesn’t make sense.”