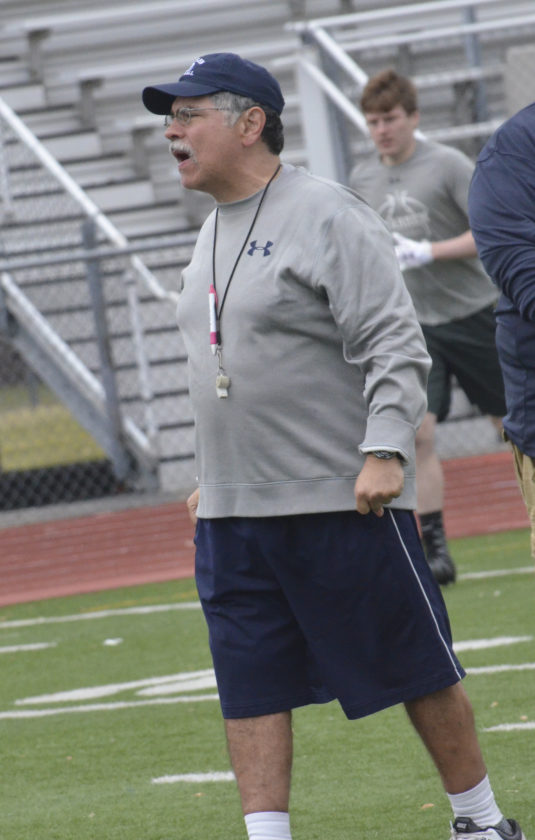 Warren football coach Mark Morelli barks out instruction during spring practice Saturday at War Memorial Field. The first year coach is bringing a new attitude as the Dragons look to improve from a 1-9 mark in 2016.

You can hear it in his voice, but more importantly it’s in his actions. That was on display Saturday afternoon at War Memorial Field where a group of 75 young men got a crash course introduction to his offensive playbook.

It’s a group that has plenty of talent, but is looking for better results following a 1-9 campaign in 2016.

“I’m a football lifer,” Morelli said. “It (Warren job) was a good challenge. There were some things about the program, the size of the school (that appealed to him) where I thought I could bring my experience, my background and my passion for the game to get the program turned around and get it back to being competitive.”

Of course, that sometimes can be easier said then done. It takes commitment, not only from the coaches, but from those young men who will be putting on the uniform.

If early returns mean anything, that commitment appears to be there in spades. Enthusiasm was high as players and coaches alike got together for the first time on the football field more than five months away from their first regular season game.

That group also included a 19-man contingent from Youngsville, which is now part of a co-op with Warren.

Morelli doesn’t see that however – he just sees football players.

“What I’ve told everyone is that I’ve had to deal with this personally,” Morelli said. “I was the head baseball coach at Ridgway when we lost our team to Johnsonburg and I was also a bystander watching the merger of Ridgway and Johnsonburg football.

“I’m fresh up here. The Youngsville kids are coming in and I’m color blind. By that I mean I don’t know who’s from Youngsville and who’s from Warren and that’s a good thing. That’s what we’re trying to convey to the kids and the parents. Everybody is equal. Youngsville won one game last year, Warren won one game last year. Our idea as coaches is we’re going to put the best kids on the field because we want to win and we want to get the program back to being successful and being competitive.”

Together they are one team, and were busy at work on Saturday as they ran through play after play in their new offense.

So, what is Morelli hoping to accomplish in these spring practices, the next of which will take place this coming Saturday?

“We want the kids to get acclimated to our coaching staff and some of the changes that are going to go on with the program and to establish that comfort level with the kids so they know what our expectations are,” he said. “The quicker we can get it jump started the easier it’s going to be when summer comes with 7-on-7’s and those types of things.”

It’s easy to see what type of philosophy he brings to the offensive side of the ball.

But that doesn’t mean they won’t spread the ball out and throw it.

“We want to be able to spread the field and keep opposing defenses off-balance,” he said.

And they’re going to do so with a fresh start.

“Basically, I want to put last year in the past and start over,” he said. “It’s a new regime, a new coaching staff, new philosophy, new everything. What’s in the past is in the past. Let’s move forward and look in a positive light to the future.”

Yes, football season is still a ways away, but in a football crazed state, it’s never too early to start thinking about it. And the enthusiasm seems to be genuine.

“One of the things I’ve really been impressed with since I got the job in January is the amount of support and enthusiasm that the community has shown,” Morelli said. “My coaches have been telling me that. People are excited and I think there’s a curiosity. The kids want to be successful and they’re willing to put the time in to do that. We as coaches want the same thing the kids and the people in the community want. We want to turn this thing around and become a winner.”