Dragonflies: They do what?! 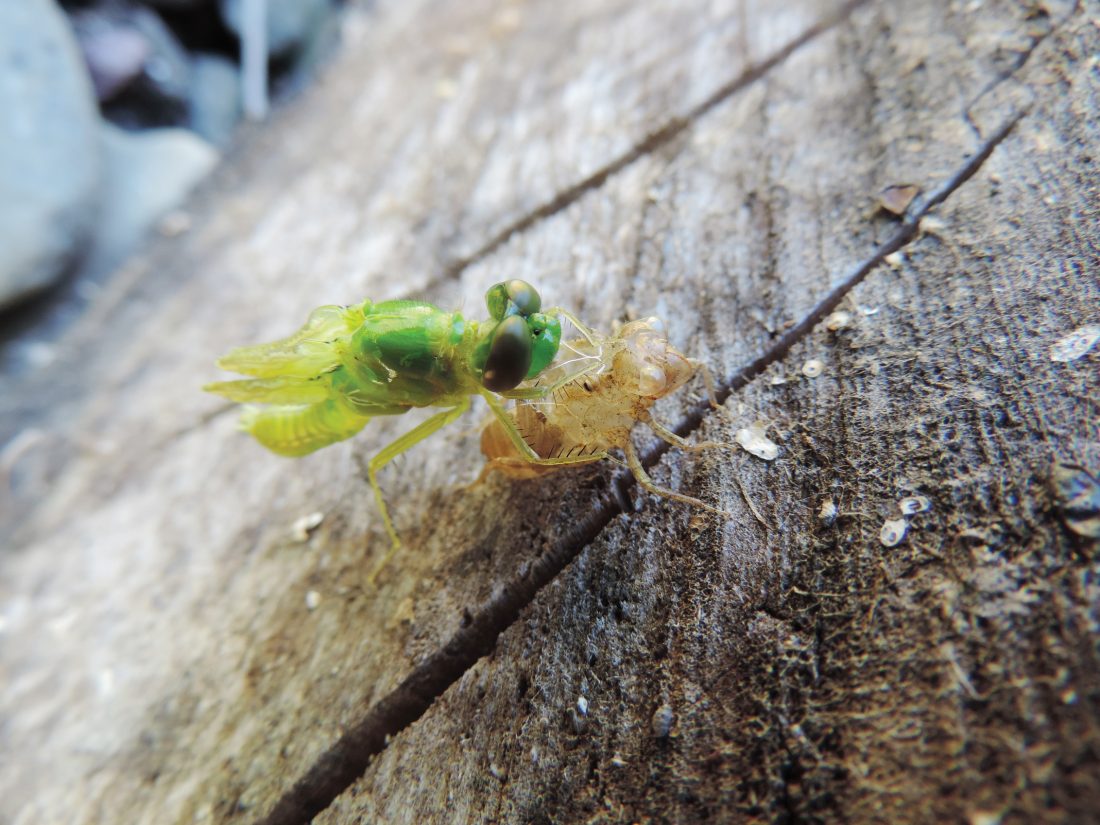 “Does anyone want to go outside to see a Black Saddlebag?”

Statements of this kind are frequently heard around the offices at Audubon. We stop work at our desks, jump up with our cameras, and head outside. Being aware of what is going on outside is a major part of our jobs, so it is really a change rather than a stop in work. We’ve “changed” work for many things including a strange colored starling at the bird feeder, an injured Canada Goose, an unusual flower in bloom, and more.

That day, I followed my coworker outside, curious about what creature would be stuck with such a name as a saddlebag. Just outside the door, she pointed to a large dragonfly resting on a bush. Its clear wings were spread out glimmering in the sun; the distinctive black saddlebag markings on the hind wings silhouetted against the green leaves. The black markings were reminiscent of symmetrical Rorschach inkblots. Bright yellow spots adorned the abdomen.

“Often seen along coastlines or mountain ridges in summer and early fall,” my coworker read from the field guide, “this is a migratory species.”

“This is a what?!?” I said in astonishment. Admitting my ignorance, I asked, “Dragonflies migrate?”

Most people are familiar with the movement of birds to a warmer climate this time of year. In the past few weeks, we’ve seen the hummingbirds disappear from our feeders and juncos have been spotted moving in for the winter. But, even compared to the smallest hummingbird, dragonflies appear so fragile to be flying such distances.

The Black Saddlebag is just one of the 100+ species of dragonflies and their close relatives, damselflies, in New York. Classified by scientists in the Odonata order, these insects have interesting life cycles. Much like a caterpillar changes into a butterfly, dragonflies go through that miraculous process of metamorphosis. Starting as an egg in the water, they shed their exoskeleton as they grow. Depending on the species and environment, dragonfly nymphs (as their aquatic stage is called) may spend several months to several years in the water.

They don’t have a pupa stage as in butterflies. When the time is right, the nymph crawls out of the water on a structure such as grass, a rock, or a boat dock. Its exoskeleton splits down the back and it crawls out, its wings slowly growing as it pumps fluid into them. If you are lucky, patient and observant, you can see this process from mid-spring to early fall. I was all three one day and saw a damselfly emerge along a riverbank. I rank it as one of my top 10 coolest nature experiences to date. It was also eerily reminiscent of the movie Alien. You know the part.

The glistening of the Black Saddlebag I saw with my coworker indicated it was a general — a newly emerged adult with a soft body and wings that still had to dry. This individual will probably take to the wing and fly south, along with 8 other long-distance migratory species of dragonflies. But when… and why… and how? These are the questions that scientists still don’t have all the answers to. But they are working on it. Scientists are now tagging dragonflies using small radio transmitters that they glue to the insects’ thoraxes to monitor their flight behavior. They are finding out that dragonflies behave a lot like migrating birds. Colder nights may be a cue to start their journey. They fly during the day using the same flyways along mountain ridges and coastlines. One Green Darner dragonfly was tracked at flying 100 miles in a day! Before they fly, dragonflies pack on the fat and stop to feed every few days during their journey. Bird watchers have observed dragonflies flying along with kestrels as they migrate together. This gives new meaning to the “in-flight snack”.

Where exactly do they go? Internal magnetic compasses, the position of the sun, and physical landmarks are several theories about how these insects (and birds) navigate. Their destination, however, is still unknown. Dragonflies have been seen in Florida and along the Gulf of Mexico. But they may go farther. We have a tendency as humans to think we understand the natural world but there are so many mysteries. It wasn’t until the mid-1970s that we found the overwintering grounds of Monarch butterflies. Do dragonflies have an overwintering ground where they hang in the thousands in some remote tropical location? Or perhaps they continue as part of the mosquito defense system in South America, as they do here, hungrily eating other pesky insects. Maybe we will find out one day. The same questions may be asked of other migratory insects such as grasshoppers, moths, beetles, and butterflies.

So, as you feel the temperature drop and pull out your warmer clothes, take a minute to ponder all those other creatures getting ready for winter. Are they going to tough it out with a heavier coat, sleep through it all, or take to the wing, like the dragonfly, and move to a warmer climate?

Nature is amazing. Wonder at it or learn about it this fall with a trip out to Audubon. I hope you will find something that makes you say, “They do what?!”

Katie Finch is a naturalist at Audubon. This article was originally published in 2011.