If you love Baseball… 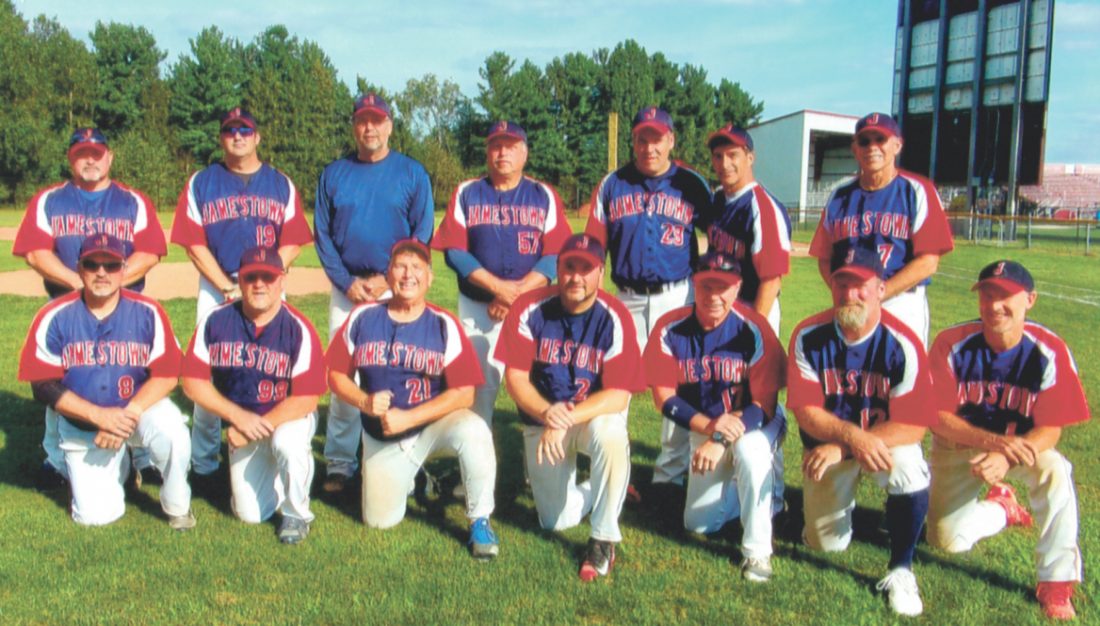 It’s a long way to October, but my baseball season is over.

It’s not because of my chosen Major League Baseball team’s record.

No, I mean the baseball team I play on — the Jamestown Old Timers.

There were 10 dates on our calendar this season, with most of those being scheduled for double-headers.

I joined the team mid-season and played on five of those — three at home in beautiful Diethrick Park — and the other two in eastern Ohio. Most of the teams in the league are from the Youngstown area. One is from Chester, W.Va., not even as far south as Pittsburgh (who knew?), and another is from Greenville, Pa.

With finished 6-and-10 and in last place out of six teams in the National Division of the 50 Plus Baseball League.

After the regular season, we headed to Boardman Fields of Dreams for the playoffs.

We lost our first two games in the double-elimination tournament, but that was two games of baseball I wouldn’t have otherwise played.

Losing stinks. Nobody on the team likes to lose. But, while the competitive drive is still there, we realize that we’re a bunch of 47- to 71-year-old men playing a kids’ game. If that’s not enough and you have to win, go somewhere else.

Striking out stinks. But it’s part of the game. We faced one pitcher who brought about 80 miles an hour. We faced another who brought 78 years to the mound. We struck out against both of those guys.

Making errors stinks, too. My almost 50-year-old body is not the same as the one I used to play baseball in. I made an error in our first playoff game. I only had three or four chances that game, so my percentage — and subsequent attitude — was not that good.

The 62-year-old pitcher we faced in that game played three years of AAA ball. He certainly knew how to pitch and my outfield error meant that we lost something like 11-to-1 instead of 10-to-1. Still, I threw my glove and hat and muttered all day.

Another thing that has changed over the years is the dugout chatter.

Before a game, you hear about work, aching joints, medical problems that are really uncommon for 18-year-olds, and stuff like that. I don’t remember what people talked about before high school games, but I know that wasn’t it.

I don’t remember seeing high school players slather up with horse liniment, either.

I do remember being exhausted after running out a triple, but I’m sure it took a lot less time back then.

I get to join in the medical condition conversations.

In the middle of the season, my right eye’s intraocular lens implant dislocated. It’s still in there. But it’s not often over the part of my eye that I see with — exclusively when I’m looking almost straight down and then only rarely.

So, I have no ability to focus on that side. Fortunately, I bat right-handed, so I pick up the ball out of the pitcher’s hand with my left eye. That’s good. I’m not sure I could have hit at all if my left eye had been the problem. As it was, I had trouble picking up rotation and struggled some with breaking pitches… and it doesn’t help in the field.

I’ll get that fixed soon and be back with two eyes next season.

I’m already looking forward to May.

We lost our second playoff game to Niles on Sunday. We played much better. The final score was 11-to-7.

After that, Ed, our chief/captain/manager/pitcher, encouraged everyone to come back for next season.

I’m not sure what I would have done if he hadn’t encouraged me to come back. I suppose I would have had to stage a coup or join a rival — much farther away — club.

If, like me, you heard that there is baseball for people who haven’t played in 30 years and you got that look in your eye, send me an email and ask for some details.

If you are well over 50 and think you might not fit in… you’re probably wrong, come on down to a practice. Or, if you like to travel, sign up with an over-58 team in Youngstown. Several of our players join teams from all over for national tournaments at 50-plus, 55-plus, 60-plus, 65-plus, and 70-plus. We don’t have anybody in the over-75 age group right now, but I hear there are teams for that. If you’re not going to be 50 for three or four years, neither am I. Our charter allows us to include folks as young as 46.

Other than that, there’s a try-out process, but, if you love the game like we do, your chances are good.

And, if you do love baseball, chances are very good that you will have a blast.