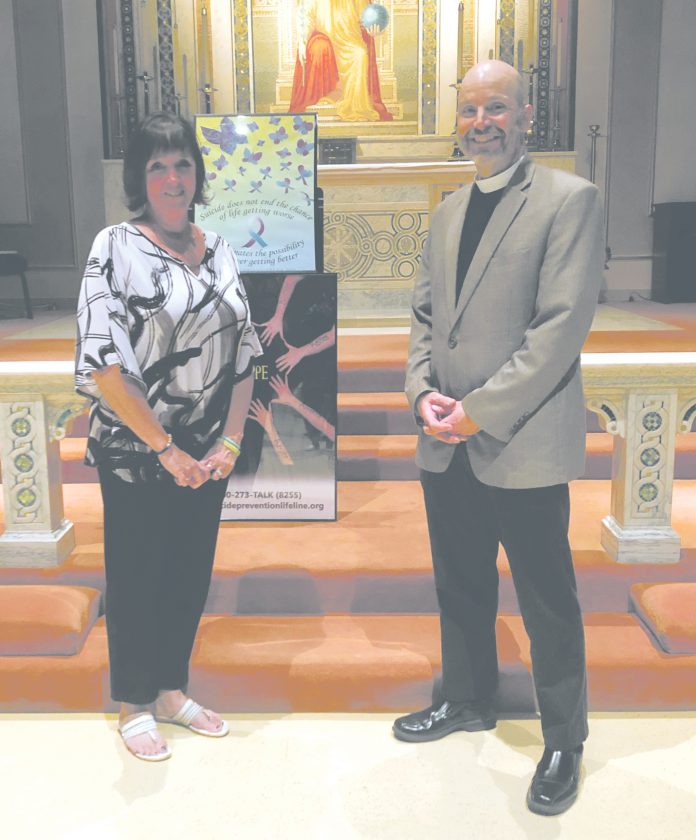 Question a person about suicide.

Persuade someone to get help.

Refer someone to the appropriate resource.

In the light of World Suicide Prevention Day, Kari Swanson, founder of CORE, was invited to do a QPR training at the Trinity Memorial Episcopal Church, Tuesday, September 10.

QPR was started by Paul Quinnett, Ph.D. It is not a form of counseling or treatment, but rather intended to offer hope through positive action.

The suicide prevention program is about opening a door of communication for someone who is struggling, letting them know there is someone there for them.

Swanson took the group through the training of the QPR program which spoke on warning signs, myths and facts of suicide, statistics, mental health and resources for help.

“90% of people who die by suicide had a treatable condition,” said Swanson. “22 veterans a day die by suicide. [Things like] depression and PTSD are real.”

One million people each year die by suicide, 28,000 of those are Americans. That’s 75 people per day every 18 minutes.

Swanson revealed there are things like suicide chatrooms online, suicide pact websites, as well as webpages that will tell you how to commit suicide and help you through it.

“That’s where are kids are today and it’s scary,” said Swanson.

We don’t know the statistics as well as we should, some suicides are ruled car accidents or accidental.

“Suicide needs to be less taboo. The same way we talk about cancer, sex, domestic violence, talking about suicide as easy as we talk about those subjects can save lives,” said Swanson.

When it comes to QPR, the first step is asking the question..

Know the warning signs, recognize them and ask the person, whether directly or indirectly, if they may be contemplating suicide.

Swanson’s go to in her practice is “do you ever wish you could go to sleep and not wake up?”

A more direct approach would be not beating around the bush and being straightforward,“are you thinking about suicide?”

The most important thing to do when talking with someone possibly contemplating suicide is to remind them of their presence. Acknowledge their presence and make them feel you are a “safe” person, someone that’s there for them.

Once the question is asked, you move on to the persuade process.

It’s important to allow the person to talk and make them feel heard. Do not interrupt or try to speak over them.

Keep that person in your presence during the persuade period, leaving them alone or passing them off could make them feel alone.

Ask them “will you go with me to see a counselor?”Or any other person who may help such as a priest, school nurse/counselor or a psychologist.

The last step of the QPR process is referral.

This involves connecting the person with a competent mental health professional.

Suicide is preventable, know the warning signs and don’t be afraid to ask the question. It will not plant the seed of suicide deeper into the person’s head, it will lessen their anxiety and open up the door to communication.

Warning signs can include direct verbal clues such as “I’ve decided to kill myself,” or “I wish I were dead.”

They can also be indirect verbal clues such as“I’m tired of life,” “who cares if I’m dead anyway,” or “you would be better off without me.”

Purchasing a gun, stockpiling pills, putting personal and/or business affairs in order, giving away prized possession, relapsing on drugs/alcohol or having a problem with, or sudden interest or disinterest in church or religion.

Question a person about suicide.

Persuade someone to get help.

Refer someone to the appropriate resource.

“The same way thousands of Americans are saved by CPR, use QPR to save a life,” said Swanson.