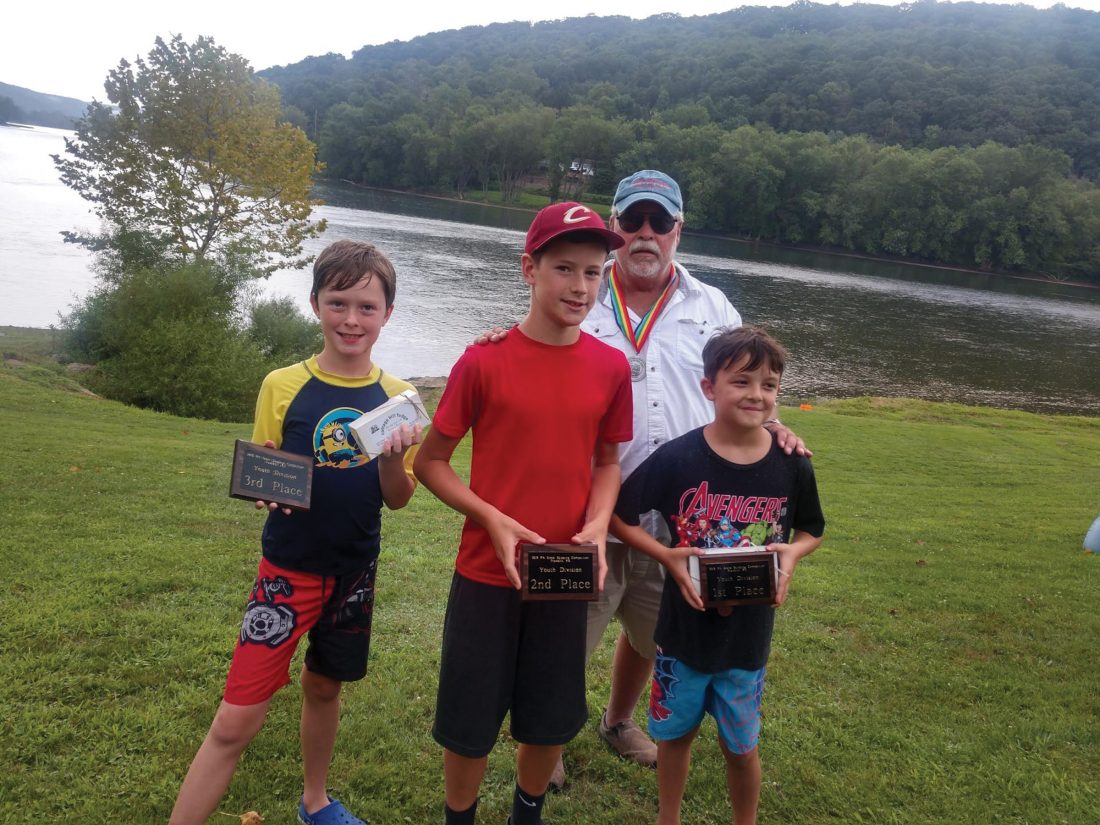 For the past eight years or so, the Ferry family has made an annual pilgrimage to the holy land of Pennsylvania stone skipping — Franklin.

We have known a great deal of success.

Alex won the youth event something like four times, won the amateur event the first year he wasn’t allowed to be a youth, and competed with the pros almost every year. Alex’s best stone in the pros was a 39, but it wasn’t enough to land him on the podium that year.

Brian qualified as a pro his first year and finished second once with a best of 38 skips.

This year, Liam entered the competition — in the youth division — for the first time.

He had only been out practicing one time this year and wasn’t even sure he wanted to compete.

On Saturday, he was good to go.

He picked from the more than one hundred stones we took with us, and I gave him some last-minute pointers on his form.

Then, he was on his own.

After waiting in line for the handful of skippers ahead of him, Liam walked up to the judge, calmly handed him his form, and walked to the water’s edge.

He was briefly the leader of the youth division.

Then another young member of a stone skipping family — Luke Ohmer, son of multi-time state champion Dave ‘Spiderman’ Ohmer — knocked out a 26.

Eventually, another youth in the unusually large field of competitors scored a 17 and Liam ended up in third place.

I’m not sure exactly why the prize for winning a stone skipping contest is fudge, but that’s what it has always been.

Neither Brian nor Alex won fudge this year. Liam topped both of us.

But, it was a good day for Warren County skippers. Andy Severns of Tidioute took third place in the professional division with a high skip of 42 and a second-best of 41 — besting Spiderman, who had a 42 and a 40, and world record holder, Kurt ‘Mountain Man’ Steiner, who had a 40.

Gabriel ‘the Professor’ Garfinkle of Ardmore nailed a 44 with his last stone to win the competition. J. Mark Graham of Fairview finished second with a 43 on his next-to-last stone.

Each of the 32 professional competitors threw two stones in each of three rounds.

The final round was filled with intrigue.

A storm had been moving into the Franklin area as the competition progressed. Lightning could be seen in the distance for some time. A few much closer flashes — and the toppling of some tents in high winds — resulted in a delay very early in the last round.

The storm moved off quickly, but competitors thought it might be wise to finish quickly. One cleverly called out — “lightning round!”

Moving quickly through the round didn’t keep the scores down.

There were only four throws of at least 40 in the first two rounds. Six competitors threw 40 or better in their final two stones.

Alex had a 35 on his last stone, matching the score he had on his first.

Brian delivered a 33 on his last stone, just short of the 34 he put on the board with his fourth throw.

That’s right. The youngest son won fudge. The oldest son beat dad. I’m disappointed in my performance but more proud of theirs.

Liam has a couple more years of youth competition to go before he has to go head-to-head-to-head with dad and big brother.

It could happen any year. Anyone who skips at least a 25 in the youth or amateur divisions may compete with the ‘professionals.’

Hopefully, he’ll become more willing to share some of the fudge he wins. I didn’t get one bite this year.