A gift of life

Photo submitted to the Times Observer Allison Sedon donated her bone marrow to an unknown recipient in September. Sedon registered as a donor in 2014 through “Be The Match.”

Photo submitted to the Times Observer Allison Sedon, a 2014 graduate of Warren Area High School, donated her bone marrow to an unknown recipient in September. Sedon registered as a donor in 2014 through “Be The Match.” 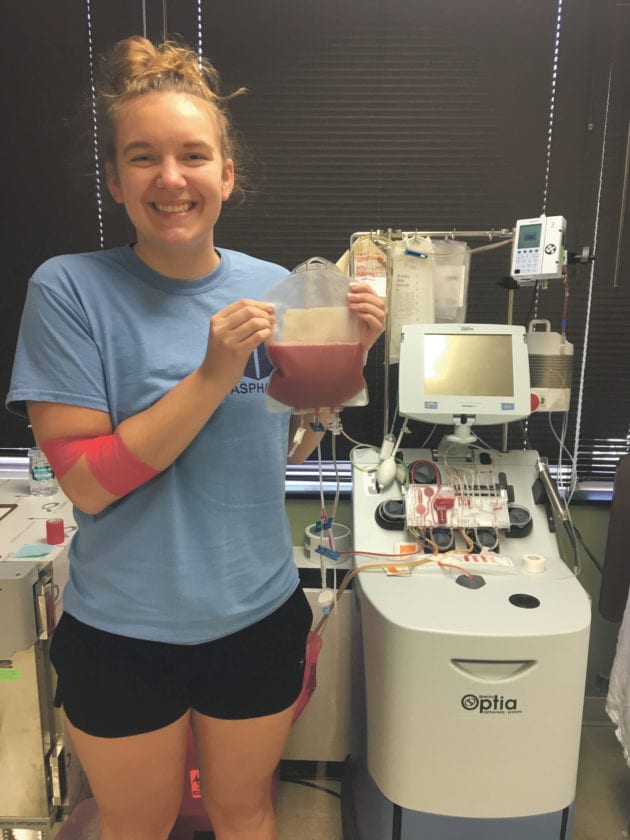 Photo submitted to the Times Observer Allison Sedon, a 2014 graduate of Warren Area High School, donated her bone marrow to an unknown recipient in September. Sedon registered as a donor in 2014 through “Be The Match.”

Allison Sedon never met her paternal grandmother. She died from a form of bone cancer more than 35 years ago.

Recently, Sedon, a 2014 Warren Area High School graduate, gave a part of herself in hopes that some other grandchild may have the chance to grow up with warm grandma hugs and kisses.

Sedon recently donated her bone marrow to a woman awaiting a stem cell transplant. She has yet to learn much about the woman except her age–69.

Sedon’s mother, Andrea, was told the woman lives somewhere in the United States and suffers from myelodysplastic syndrome. Myelodysplastic syndromes (MDS) are conditions that can occur when the blood-forming cells in the bone marrow become abnormal. This leads to low numbers of one or more types of blood cells. MDS is considered a type of cancer.

“I would like to think that if something like this (bone marrow donation) was available back then, that she would have been able to get a match and be able to make more memories with her family and watch her grandchildren (my sister and I) grow up,” Sedon said about the grandmother she didn’t know. “Since the lady who was receiving my donation was 69 years old, I can’t help but think that I was helping someone else’s grandma stay alive to make more memories with.” 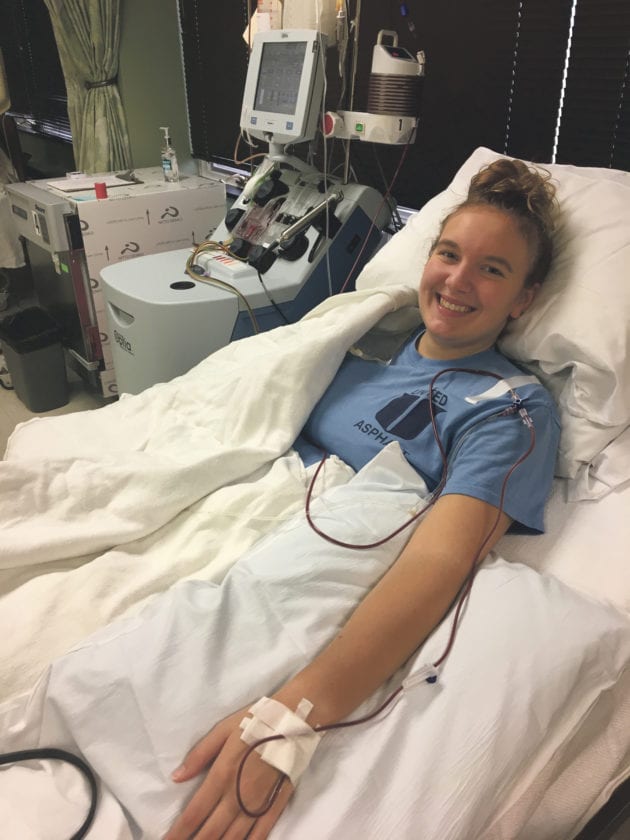 Photo submitted to the Times Observer Allison Sedon donated her bone marrow to an unknown recipient in September. Sedon registered as a donor in 2014 through “Be The Match.”

It wasn’t a stretch for Sedon to draw a connection between the two women, but it was a different connection that initially motivated her to register as a bone marrow donor.

Sedon registered in 2014 when she found out that a seven-year-old friend and neighbor was diagnosed with Aplastic Anemia — a condition where your bone marrow cells are damaged, causing your body to not produce enough blood cells. “His mom shared that they were testing his brother and sisters to see if any of them could be bone marrow donors,” she said. “If none of them could, they would have to turn to donation which is risky since you never know how long that will take. Being that young and diagnosed with something so serious would make anyone nervous and scared.”

Sedon was in the middle of her first semester at Slippery Rock University when her mother told her about their neighbor’s illness. At about the same time an organization focused on bone marrow transplantation and research — Be The Match — visited campus.

“With my neighbor in the back of my head, I just knew I had to be put on the list. Even if I wasn’t going to be matched with him, I wanted to help at least someone,” she said. “All I had to do was fill out a health questionnaire (to make sure I was healthy) and swab my cheeks — boom, done.”

Done, except for the waiting game, according to Sedon. “It’s kind of funny, for about the next two months I always checked my emails and paid attention to the numbers calling me, almost expecting it to be the Be The Match organization,” she said. “After the first couple months I honestly completely forgot about it. I knew I had my donor ID card in my wallet, but other than gazing past it I never thought about it.”

Sedon chose not to wait in anticipation of a phone call that might not ever happen. “Actually, one of the nurses who helped me through the process said she’s been on the registry for almost 40 years and hasn’t been called,” she said. “You just never know.”

Sedon graduated from S.R.U. in 2017. She was making plans to “move from little Warren” to pursue a masters degree in epidemiology at George Mason University in Fairfax, Va. last summer when it happened — the phone call from Be The Match. “I was worried I wasn’t going to be able to help, that I would have to turn them down,” she said.

She was able to have her initial blood tests done at Warren General Hospital. Her arrival threw some of the staff for a little loop. “My registration check-in woman was so confused as to why I was there. Eventually, one of the head nurses in the blood lab came out and helped her,” she said. “She told me in her 20-some years of working at the hospital, I was only the second patient she has ever seen get blood drawn for a bone marrow donation.”

The move to Virginia actually made the donation process easier, according to Andrea. “If she had still been in Pa. she would have needed to travel to Cleveland or Pittsburgh to have the procedure done,” Andrea said. “Where she moved to in Virginia, there’s a hospital that specializes in these donations just 20 minutes away.”

“Finally we had a date — Sept. 26,” Andrea said. “There are two different ways to harvest bone marrow and she was able to do the non-surgical option.”

“The day of the donation, it took 5 1/2 hours to get enough stem cells that the woman would need for the transplant,” Andrea said. “They told us the woman would have gone into the hospital at least five days ahead to take all her stem cells out, because if there was one cell left, it would fight Allison’s cells coming in. Allison had up until those five days to back out but once they started this with the woman, they would take her to the brink of death.”

The courier was in the waiting room waiting to fly Allison’s donation to the recipient, according to Andrea. Allison was tired and sore afterward and couldn’t lift anything for about a week after the procedure due to her spleen being enlarged. “From all those injections and producing the extra marrow, your bones take as much as they need, then the extra goes into your blood stream and gets stored in your spleen, explaining why it was enlarged,” Andrea said.

The discomfort was temporary, but the experience was life-altering for Allison.

“If I learned one thing about myself, it would probably be that I’m stronger than I thought,” she said. “It’s a lot of commitment, information and procedures. Having the right mindset to put myself through all of that showed me that I have more mental strength than I thought I had.”

Both Allison and her mother hope to connect with the recipient some day. “After one year, the recipient and I are able to sign a form and they will release some of my contact information to her and we could meet,” Allison said. “This step is completely up to the recipient though, so we’ll have to wait and see.”

Sedon would not only encourage others to register as donors, she’s counting down the days until she can do it again. “In four years I can be put back on the registry to be available to donate again,” she said.

“We are so grateful for Allison’s selflessness and we’re thrilled that she’s sharing her story in order to inspire others to join the fight against blood cancer. All it takes is a simple cheek swab and you could be someone’s second chance at life,” said Lauren Mueller, representative with be The Match. “If you feel inspired to potentially help a patient in need, please visit Bethematch.org for more information and to receive your swab kit in the mail.”