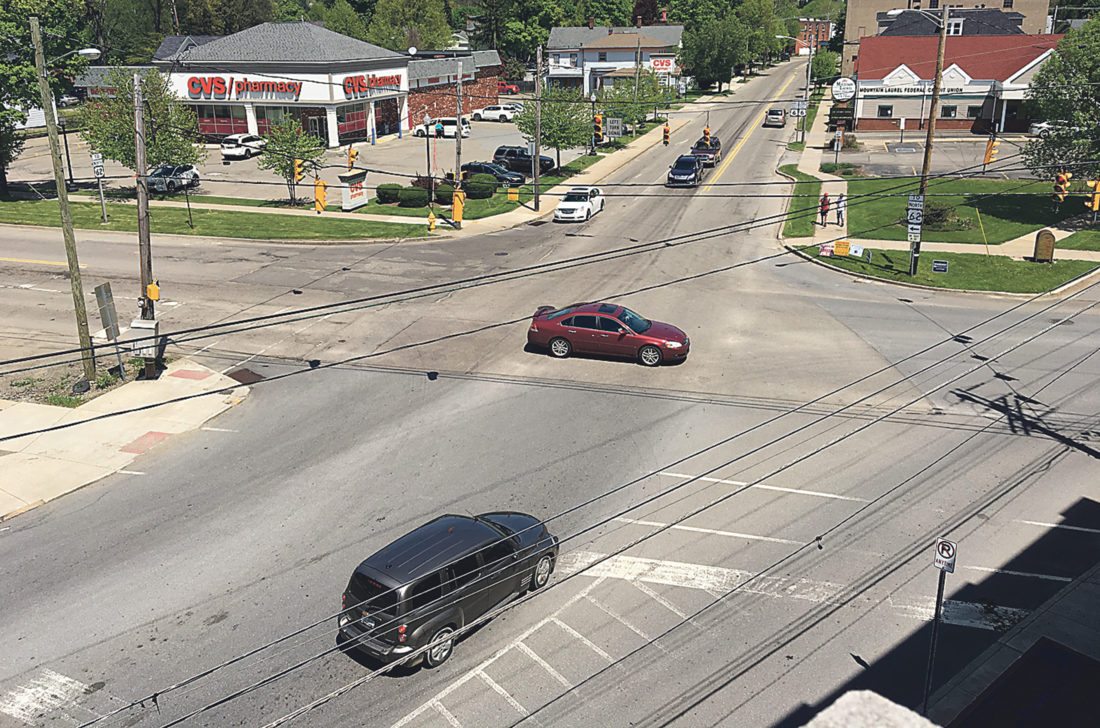 Times Observer photo by Josh Cotton Improvements to this intersection – Market St. and Pennsylvania Ave. in Warren – is included in the next Transportation Improvement Program, which addresses funding for transportation projects in the region.

The committee tasked with determining major transportation projects in the next four years for a five-county region — Warren included — has revealed its list.

Warren County is part of a Rural Planning Organization under the auspices of the Northwest Commission. The RPO includes the Northwest Transportation Advisory Committee, which takes lists of projects from each of the five counties — Clarion, Crawford, Forest, Venango and Warren — and boils them down into one plan funded by one large pot of money.

Transportation Advisory Committee Chairman Dan Glotz, who is also Warren County’s planning director, said that the projects included in the 2019-2022 edition of the Transportation Improvement Program (TIP) are included in a 25-year long range transportation plan.

Glotz said that once projects are identified and included on the TIP it “means money is committed to that particular project.”

He said that the “five different phases that could apply to a project” – preliminary engineering, final design, right of way, utilities and construction – are detailed in the TIP.

A total of 22 projects are identified for Warren County. Not all are set to be completed in the four-year window, but rather will be in one of the those five phases during the next four years.

Here are some of the highlights from the draft document that is currently open for public comment:

¯ Intersection improvements are also planned on Market St. from Pennsylvania Ave. to Fourth Ave. The construction work is planned for 2020. What those improvements will look like isn’t yet clear. “The feds are telling us whenever an intersection is considered for improvement and rehab (that we) have to consider all options for analysis,” Glotz said. The end result will depend “on what the findings tell us.”

¯ Rehabilitation of the Morrison Bridge over the Kinzua arm of the Allegheny Reservoir to include “roadway improvements and the cutting back of the rock wall around the southern side of the road to the east of the… bridge.” That $2 million project is planned for design in 2019 and construction in 2020. A long-range project that would replace the “Jack Trusses, Rocker Bearings, Pot Bearings and Jacket Piers – estimated to cost $7 million – in projected for 2023-2026.

¯ Bridge preservation of the truss bridge over the Allegheny River in Tidioute. Design costs are projected at $200,000 in 2020 with $4 million in construction estimated for 2022.

¯ Intersection improvements are also programmed for US Rt. 6 at Railroad St. in Youngsville which “involves improving the geometry and capacity” of the intersection, according to the TIP. Engineering for that project isn’t planned to commence until 2022.

¯ Engineering for a 7.5-mile resurfacing project – Rt. 62 from Hatch Run to the New York state line – is slated for 2022 with construction to take place in the next four year window of the TIP.

¯ New ramps off of US 6 at Main Ave are also included. A study is currently underway to gather information regarding that possibility. Glotz said that the funding programmed in the TIP would be for engineering.

Information on the TIP can be found at http://www.northwestpa.org/transportation/.