The Eagles have landed

Youngsville band returns home from Ireland with help from congressman 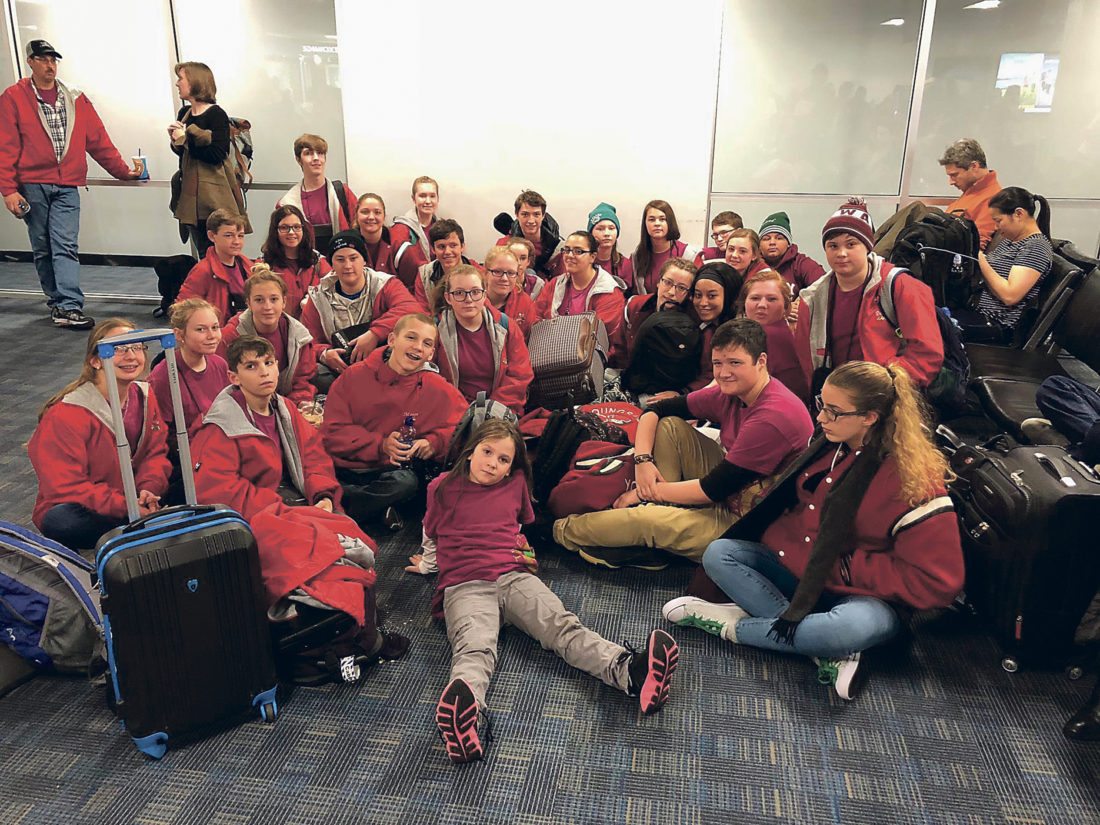 The Youngsville Marching Eagles take a break from their extended itinerary for a photo at Dulles International Airport upon their delayed return to the United States.

Thanks to some friends in high places, the Marching Eagles got a flight home only one day behind schedule.

The Youngsville High School marching band was stranded in Ireland when their flight was canceled due to weather back home.

No one could tell the travelers, or people waiting for them at home, just when they might be able to return.

The tour guide from Atlantic Group Tours made sure the group had hotel accommodations and set up more activities — including an additional performance. The group was upbeat, but, there was no timeline set.

“They should have been in the air Thursday,” Warren County School District Superintendent Amy Stewart said. “They were talking about any number of days it would take to get them back.”

Stewart took that advice and ran with it.

They steered her to Congressman Glenn Thompson.

Stewart wasn’t sure exactly what the Congressman would be able to do, but she made the call.

“Our office just made sure that United was aware that these students were trying to get back,” Thompson’s Communications Director Renee Gamela said. “They just won first place at the Limerick band festival. The Congressman wanted them to get home as fast as they could to celebrate with their families and their community.”

The weather in New Jersey was the problem.

“Because of the snowstorm on Wednesday, many flights from Newark were canceled including a daily flight that goes to Dublin,” Gamela said. “That resulted in a canceled flight back.”

It wasn’t as simple as taking the next flight.

“Once the flights get stacked up, they have to figure out how to make up the volume,” Stewart said. And, although the group was willing to split up — there were plenty of chaperones and many of the students were traveling with parents — it wasn’t a matter of getting just a handful of people across the Atlantic.

“Our office worked with United to try to find an alternative,” Gamela said. “United discovered that they had an available Boeing 757 in Frankfurt. They got that to Dublin to take the stranded travelers back.”

“United was great to work and prioritize this group and their travel to get them back as soon as possible,” Gamela said.

“We received notice last night at 1 a.m. — 9 p.m. back home — that United is going to get everyone on a flight out of Dublin Fri. at noon,” a post on the band’s Facebook page said.

“That’s a lot sooner than we were prepared for based upon the initial reports,” Stewart said. “We are extremely thankful for the work that Congressman Thompson’s office did to expedite the return of our students from Ireland.”