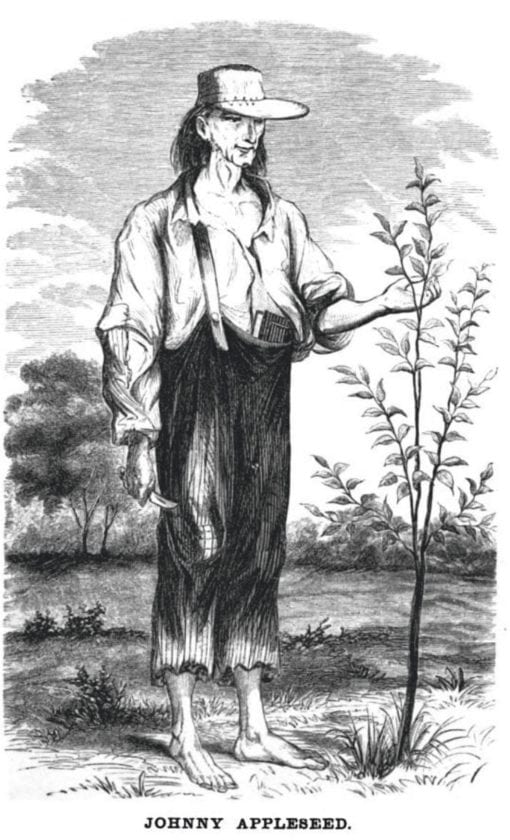 An illustration of John Chapman, aka Johnny Appleseed, originally published in the 1862 publication A History of the Pioneer and Modern Times of Ashland County.

Johnny Appleseed planted his first nursery on the banks of the Brokenstraw Creek near present-day Garland.

It was just one stop on a long, winding road that would turn a young man from Massachusetts into a mystical, shadowy legend.

He preferred to sleep outside and “tradition holds that his preferred attire included a modified tin can for a hat, a coffee-sack cloak,

An illustration of John Chapman, aka Johnny Appleseed, originally published in the 1862 publication A History of the Pioneer and Modern Times of Ashland County.

and bare feet, even in winter time,” according to a Penn State article.

He never married and essentially lived his life as a migrant (though he owned several parcels and was probably more well-off than the manner in which he lived).

“Chapman was known for his skills for surviving the wilderness, his universal kindness and his commitment to spreading the religious beliefs of Christianity, as interpreted by Emanuel Swedenborg,” according to an article from Penn State. “His uncommon habits and selfless generosity have shaped the memory of his character into that of a divine pilgrim.” 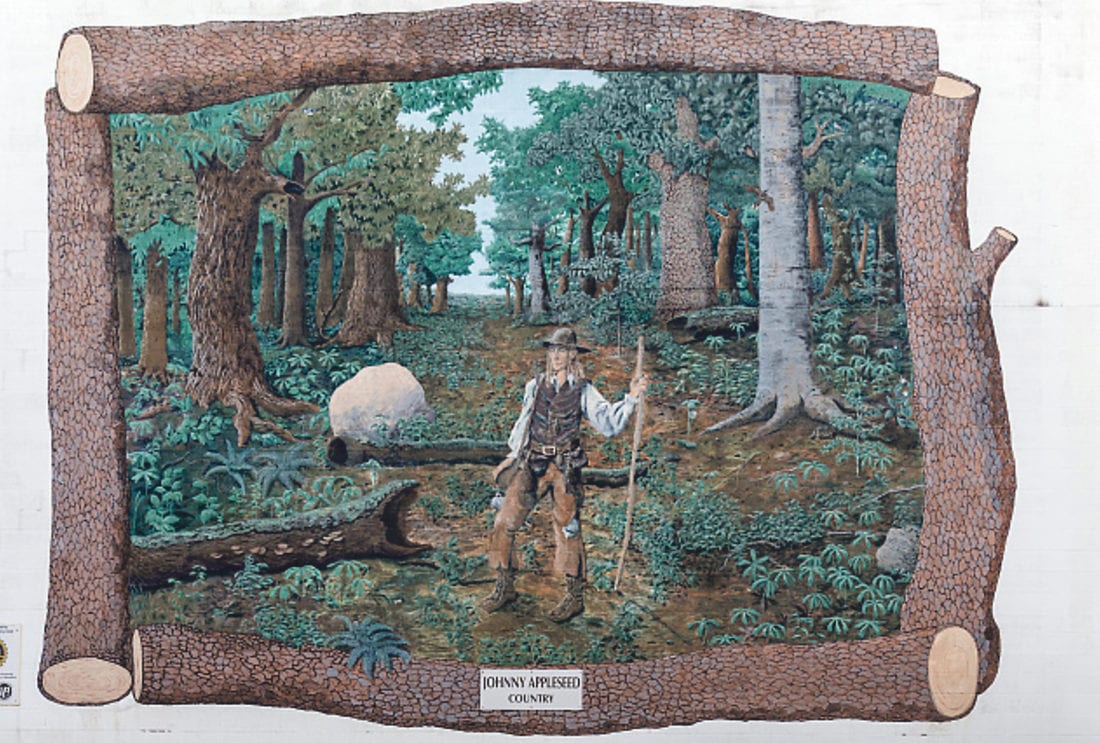 The trick to telling the real story of Johnny Appleseed is sorting the facts from the myths.

But even with the myths removed, this is still a really good story.

John Chapman was born in 1774, according to an article from ohioapples.com, which notes that his father was one of the Minutemen at Concord.

“Records of his boyhood are scanty at best,” they write. “His mother died while his father was still in service. His father married again after the war and the family moved to East Longmeadow where he spent his boyhood years.”

An article from ohioapples.com gives us a description of what the man may have looked like.

“Johnny Appleseed is described as a man of medium height, blue eyes, long, light-brown hair, slender figure, wiry and alert. He wore but little clothing and that, for the most part, was obtained by trading apple trees to the settlers for cast-off garments. Often, while traveling through his forest his only garment was a coffee sack with holes cut in it for his head and arms. He said clothes should not be worn for adornment – only for comfort. He went barefoot most of the time, even in winter. Reports indicate that he was a vegetarian eating no meat or fish. He believed it was wrong to take life in order to procure food.”

That’s what brought him to Warren County.

His history here also prominently features Giles White, also from Massachusetts but a soldier in the Revolution and over 20 years Chapman’s senior.

By 1800, White had made his way to Warren County and settled in the area of what we now know as Garland, according to his Findagrave page.

A Giles family history found on wc.rootsweb.com noted that Giles initially built a cabin “across the road from the present Whitestown Cemetery and Giles here started to clear his land. The cabin of sufficient size to house his family of wife and five sons.”

The cemetery is located on Kane Road about one mile east of Garland.

The August 22, 1970 edition of the Warren Times-Mirror tells the story of his time in Warren County.

“When the annual Johnny Appleseed Fall Festival was established in Sheffield in 1967, many people asked: ‘Was Johnny Appleseed a real person or just a legend?’ Others questioned: ‘Is it really true that Johnny Appleseed lived in Warren County?’ The answer to both queries is, of course, yes.”

The Times-Mirror confirmed the general narrative that Chapman planted his first nursery on the White property “on the Brokenstraw Creek about 1797.

“Sometime after 1799, having furnished all the pioneers in this region with orchards, Chapman moved down the Allegheny.