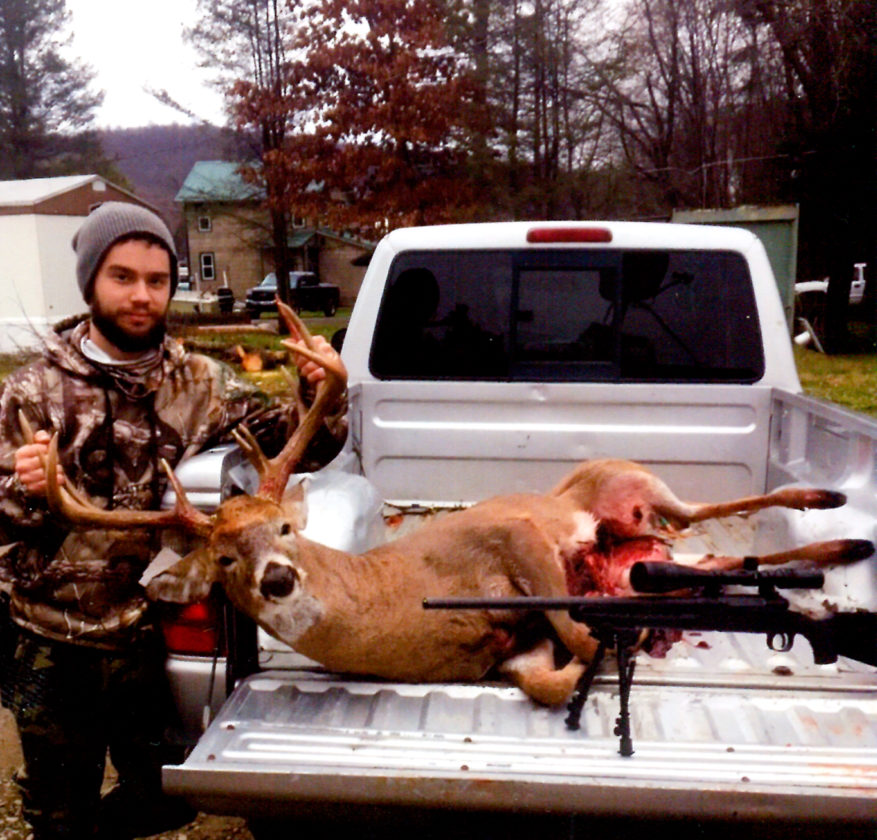 Evan Peterson, 27, of Warren, and Tanner Rosenberg, 21, of Youngsville, each wound up with a 12-point buck this year.

Peterson’s had a bit bigger spread, so he’s the winner of the Times Observer’s “Big Buck Bonanza,” with a special gift from Tall Tales Sporting Goods.

This is a “game” of inches, and both bagged big boys.

Rosenberg, who’s been hunting since he was 12, said this year’s was the biggest buck he’s ever harvested.

The 12-point buck had an outside spread of 16 inches even, and he estimated the weight of the deer to be somewhere between 200 to 215 pounds. That’s a big boy by any measurement.

While he said this is his third buck over the years, he’s also harvested six doe, and he was pretty proud of this year’s.

Rosenberg, who attends Slippery Rock majoring in Safety Management, said this year’s was the quickest hunt he’d ever had. He had just left his last college class of the day on Thursday, Dec. 1, and headed to his camp in Titusville, about an hour away.

Rosenberg said he quickly changed into his hunting gear and was headed into the woods, but he didn’t even make it to his tree stand when he saw the buck across a patch of brush. One shot and around 30 feet away. Just like that.

Rosenberg said he did miss a couple of eight points before he was able to take the buck.

“I was kind of thankful I missed them,” he said, once he saw the 12-point.

Rosenberg said he likes hunting because, “I just like being out in the woods. It’s me-time. It’s peaceful, taking it all in.”

It didn’t take a lot of me-time to bag his buck. He said that he and his family like the venison, and he plans to have the rack mounted this summer. He said, in addition to rifle, he also hunts whitetail during archery season, but has never hunted other game.

Our winner by inches, on the other hand, Peterson has been a small-game hunter up until this year.

“If it weren’t for my friends,” he said, “I wouldn’t have been out there.

“They were the nudge I needed.”

Peterson said he’d spent the night before working third shift, so it was a rough morning getting out early. But, he and his friends went to their spot.

While his fellow hunters were all veterans at the whitetail game, he said, he was having a harder time spotting deer than them.

At one point, he said, one of his friends left the trail to try and push something, anything toward him.

It worked, Peterson said, and a six-point did come his way, but “it must have gone around me. I was bummed.”

Just when Peterson started thinking his first shot at deer hunting was going to be a bust… “I just happened to see that 12-point.

“I sighted him up and could see I had a decent shot at his shoulder,” he said.

“I hit him exactly where I wanted,” said Peterson, adding that the buck did run about 150 feet.

With no blood that he could find, he wasn’t sure where to start looking, but he spotted a PennDOT truck up the road and asked them whether they’d seen it cross.

“They pointed out exactly where he went down,” said Peterson, thankful that his friends sparked his interest in adding whitetail to his hunting resume.

With his first buck hunt having gone so well, Peterson’s looking forward to getting as many tags as he can next year, for both doe and buck, and plans to possibly go out during archery season.

“It was a bigger buck than even most of my friends got,” said Peterson. “I never imagined.”

Peterson plans to mount the rack and, he said, “our freezer is packed full of venison.”

Peterson estimated the weight of his deer at under 200 pounds, but it had an outside spread of 21.5 inches.